I'm actually quite a fan of PC3-12800 memory. I feel that it's a good speed for people who are hoping to get a bit more power from their memory modules without having to spend the massive amounts of money that PC3-16000 modules tend to carry with them.

Priced at just over $100 U.S., the Patriot PC3-12800 6GB kit which sits in the Gamer Series lineup from the company is what we're going to be looking at today. What we intend to find out is if you can still get some serious performance from your RAM without having to spend the massive amounts of money that tends to come with ultra low latency modules or extremely high spec'd 2000MHz kits.

What we'll do before we have a closer look at the performance of the modules is see how they come packaged along with having a closer look at the modules to find out just what kind of timings the kit carries with it. We'll also see if we have any luck overclocking the Patriot kit we have with us today before getting stuck into the numbers game that is our benchmark results.

Looking at the package, there isn't anything too exciting going on. We've got a blister pack that is held together with two little plugs at the top. Across the top we can see the Patriot logo while at the bottom we have a barcode. In the middle of the package we can clearly see that this kit is part of the G Series which is something we've mentioned in the introduction. 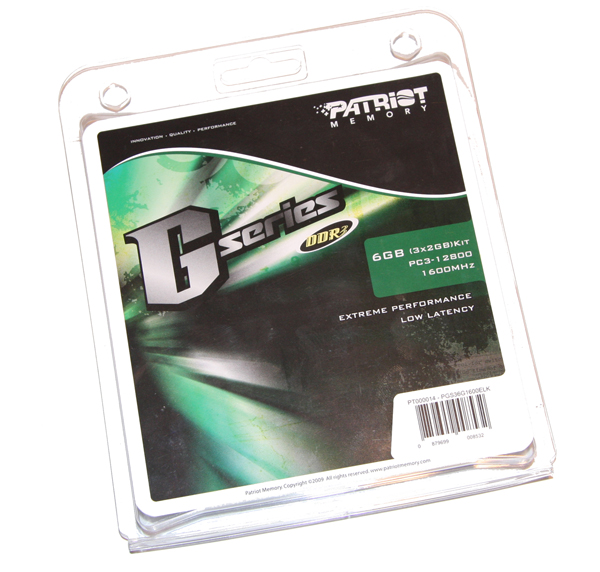 In the middle of the package we can also see that this is a 6GB kit in the form of 3 x 2GB modules, making this a triple channel kit. Below this we have the speed which is PC3-12800 or 1600MHz. Finally, we also see that Patriot mention Extreme Performance and Low Latency. Unfortunately on the front of the package we don't see what those latencies are, though. 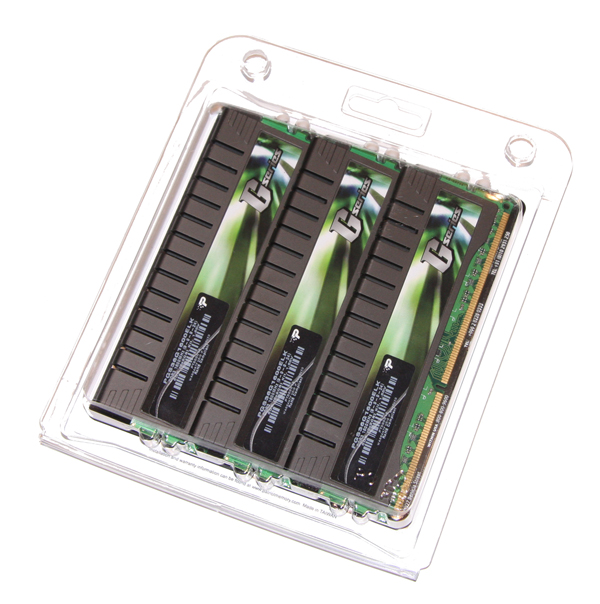 Pulling the modules out of the package, we can see like most companies Patriot has opted for a heatsink with fins that protrude out the top of the modules. Both sides of the memory modules are very similar. To the right we're able to see the G Series logo. 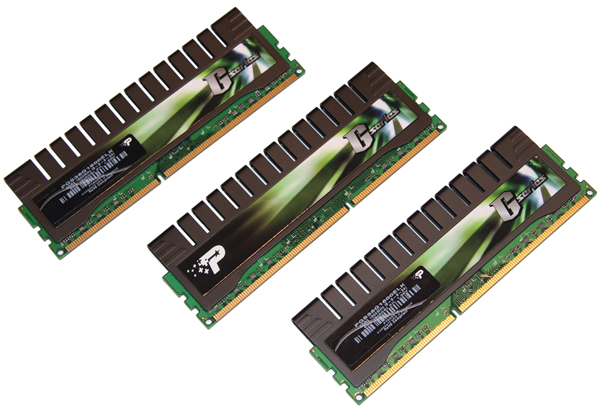 On the left side, depending which one you're looking at, we have the P from the Patriot logo or a bit more detail on the modules. 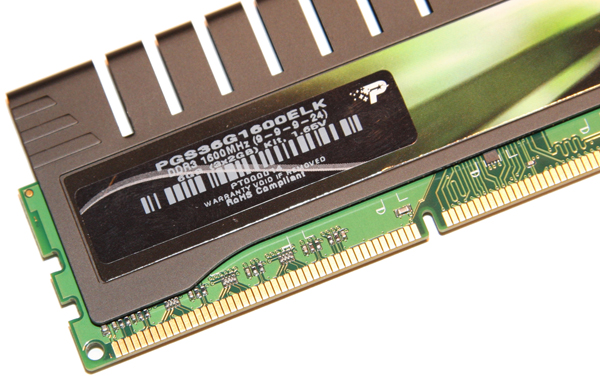 This isn't the end of the world, though, as we also mentioned you're able to see what the timings of the modules are before buying. This is also pretty standard for a kit in this price range. We also see that these speeds are acquired with the help of 1.65v, which again is pretty standard for most overclocked modules.

What we tend to find with PC3-12800 kits is that there's a little bit more breathing room when compared to PC3-16000 modules which tend to be closer to their limit. So with that said, we took the time to see what kind of overclock we could achieve with the modules.

We decided to leave the modules at their recommended 9-9-9-24 settings and since 1.65v is the recommended max from Intel, we left our voltage around that. To be more specific, it was at 1.66v since our GIGABYTE board doesn't allow for 1.65v but 1.64v and 1.66v only.

What all this resulted in was a clock speed of 1728MHz DDR or a 128MHz increase from the stock 1600MHz clock the kit carries with it. We'll see what this does for overall performance in just a minute.


When it comes to overclocking memory we do have to mess around with the base clock slightly and this can result in lower or higher MHz in an overclocked setting. With that said, we try to keep the MHz as close to the 4GHz clock that we base our system off.

Instead of the 20 x 200 4GHz setup that we normally run, our Patriot modules when clocked to 1724MHz meant we dropped the multiplier to sit with the 216 BCLK. In the end we finished up with a 19 x 216 setup which results in a 4.1GHz CPU speed for the Patriot modules when at 1724MHz. Just keep this in mind when it comes to looking at results that mainly use the CPU more so than the memory.

For comparisons sake we've also included the Corsair Dominator GT kit we looked at just the other week which carries not only a higher stock clock, but also lower timings. We'll see what kind of value the Patriot kit we have here today offers when compared to this Corsair one which is $329 (or just over 3x the price).

What we see under wPrime is that the overclocked Patriots manage to outperform the other setups. This is due to the test mainly taking advantage of the CPU clock.

Having a look at the Patriot kit in its two forms, we can see the overclock manages to give us a boost in both the read and write department. Compared to the higher clocked lower latency Corsair modules, the write isn't that far behind when overclocked. We can see that the read is a fair bit higher, though.

Under Sandra we can see that the overclocked modules get a nice little jump in performance. Again, though, moving to a 2000MHz kit with lower latency does give another good jump in these memory tests.

Like wPrime we can see that the overclocked Patriot with the higher clocked CPU manages to pull out a win here. As for how the two kits go when the CPU is clocked at the same MHz, we can see very little difference between the Corsair and Patriot.

In a real world game test we can see that there is very little difference in performance between the three setups. The 100MHz overclock does little since the jump is relatively small when you're already talking about 4000MHz of CPU clock.

The Patriot G Series PC3-12800 kit does exactly what you want out of a kit of this caliber. For 101.99 U.S. Dollars over at Newegg you're getting 6GB of GDDR3 memory that's going to offer better performance than a stock clock and give you a bit more wiggle room in the overclocking department.

In the synthetic world the extra performance that a 2000MHz kit offers can clearly be seen, but when you're talking about gaming, the stuff that really matters to a lot of people, three times the money hardly get's you three times the performance; it doesn't even get you three FPS extra in many cases.

Lacking extras like fancy cooling, the G Series kit we have here today from Patriot doesn't have the show of other kits, but manages to perform well and best of all it does this at a great price point.

If you find yourself wanting a few more MHz out of the kit, hopefully you don't have any trouble squeezing a 100 odd MHz out of the PC3-12800 kit we have here to get around the 1700MHz mark. While that's not going to do a whole lot for your overall gaming experience, there's nothing wrong with an extra few MHz under the hood. 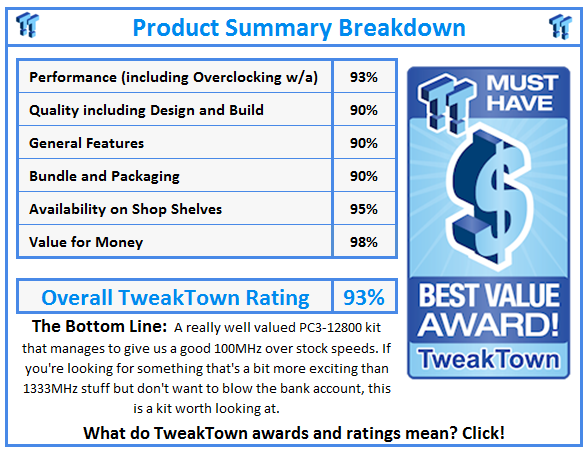