There are two basic camps when it comes to notebook computers. Some users want a tiny notebook or netbook that they can easily take with them on the road or around the house. Other users want a full-size desktop replacement notebook that can do most everything that a typical desktop system is capable of.

ASUS is a maker of computers that wasn't that well known within the U.S. until it spawned the netbook revolution in late 2007 with its line of Eee netbooks. Thanks to the wild popularity of the Eee line and other netbooks, ASUS has ridden that name recognition for all its worth and is now rolling out more machines for the U.S. market.

Today we are going to check out a notebook from ASUS called the N90Sv that falls squarely into the user group of those who want a machine with a big screen and power. The rig isn't something you would want to tote around campus all day, but it just might make you the envy of the dorm or neighborhood when it comes time to watch movies. Read on for all the details on the ASUS N90Sv notebook.

Any notebook that has a big screen and a high-end discrete GPU along with a Blu-ray drive isn't going to be cheap and the N90Sv is no exception. The rig is easy to find online and the unit I tested with an Intel T9550 CPU, 4GB of RAM, Blu-ray and 1000GB of storage can be yours for $1,799.99 over at Newegg.

Here you see the obligatory box shot showing how the notebook was packed inside. ASUS also ships the massive notebook with a Targus backpack to carry it in.

After pulling the notebook from its box, you get the first glimpse at the top of the machine and its metallic, almost color changing paint.

Opening the shiny lid of the notebook gets your first glance at the keyboard. Spacious is a good word to describe all the room under the N90Sv's lid.

As is the case with most multimedia notebooks, the screen of the N90Sv is highly glossy. That means great color and image quality, but tons of glare.

The bottom of the machine is rather plain and only has the stickers for model number and some cooling grates.

The notebook includes a ton of software along with a velcro wire tie.

This shot is of the back of the machine under the hinges for the lid. Here you can see a HDMI out, dual USB ports, VGA out and the RJ45 port along with the AC port.

The right side of the notebook has a switch to turn Wi-Fi on and off, two USB ports, the expansion card slot and the connections for external sound and mic.

The front of the machine is plain; all you get here is the release for the latch that holds the lid down.

The left side of the machine has the Blu-ray drive and the memory card reader.

The first test up for the ASUS N90Sv is PCMark Vantage. You can check out the screenshot below to see the results of the test.

The N90Sv did decently on the benchmark, but as you can see in the chart below, the machine was thoroughly trounced by the Gateway P-7808u FX gaming notebook. That said, the two machines are in different classes and aimed at different users.

The next test up is 3DMark Vantage. This benchmark gives us a good idea of the gaming prowess of the N90Sv and a good overall representation of system performance since the benchmark looks at the CPU, GPU, and other performance aspects. Check out the screen shot below for the results.

The next test for the machine is Battery Eater Pro. This benchmark puts a simulated workload on the notebook to give a specific time that the machine is able to run on a charge. The benchmark gives a good number that we can compare between machines, but as always, results in the real world will vary.

For this test on the N90Sv, I did two passes with the first pass using the high performance settings of the notebook and the second pass using the maximum life settings built-in. Check out the chart below for the benchmark results.

For the iTunes test I used my standard STP CD and converted the tracks from MP3 to AAC. The results chart below notes if any of the tests were performed with different music albums.

The final benchmark for the notebook is our movie encoding test. For this test I used the Microsoft Wonder of Flight HD video and WME available for free online. Check out the chart below for the details. Note that some of the older notebooks were tested with a different movie; the results are marked with the movie used.

After all the benchmarks were run, I set about the hands on portion of the review. The first thing you notice with a machine this large is that you have tons of screen space. I was able to get two web pages or documents open side-by-side on the screen with no problems. The screen itself is highly glossy, which is a big pet peeve of mine. I don't like to work and see everything that is behind me while doing it.

That same glossy screen is fantastic when it comes time to watch movies with the built-in Blu-ray player. I fired up my favorite Blu-ray for testing -- Casino Royale. The image quality on the notebook is top notch with fantastic colors and skin tones. The black levels are decent with only a bit of pixilation on the border between dark and light colors. There is no issue with tearing or smearing of the image during fast action sequences.

The notebook features Express Gate technology, which boots the machine into a quicker loading OS for access to basic web browsing and a few other functions. This is really a non-feature for me; it doesn't get in my way at all, but it is worthless to me. I can wait a few extra minutes to get into the real OS.

The performance of the machine for gaming is decent. The N90Sv isn't a gaming notebook at its core, but it will play most all of the games on the market today with no problems. I'm not saying it will run them with all the bells and whistles, but it's no netbook.

I have had problems with the onboard sound system of a few of the machines that I have tested. Thankfully, the N90Sv has plenty of volume to comfortably listen to music or movies. You won't mistake the rig for a full surround sound home theater, but the volume is at least loud enough that you can clearly hear dialog in the movie. I'd like more bass, but anemic bass is something that is common to virtually all notebooks I have ever laid my hands on.

In the end I come away with no major complaints about the N90Sv. The notebook has decent performance, but doesn't break any performance records. The integrated Blu-ray player is nice, especially when coupled with the great 18-inch screen. The real issue with the N90Sv for me isn't the machines performance as much as it is the price for performance. Much of the cost of the machine is tied up in the Blu-ray drive and the fantastic screen.

If gaming is your bag, the Gateway P-7808u FX is nearly identically priced but offers much higher performance than the N90Sv, but it lacks the Blu-ray option. The N90Sv is a very capable multimedia notebook and I wouldn't hesitate to recommend the machine. Just be sure that you plan to use the Blu-ray drive heavily to justify the cost of the machine. If you won't really use the Blu-ray, you can get significantly more performance elsewhere for the same money. 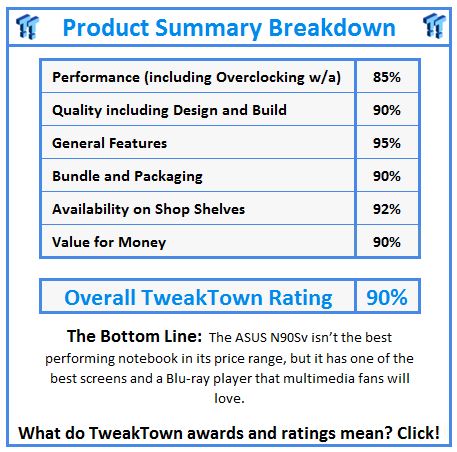