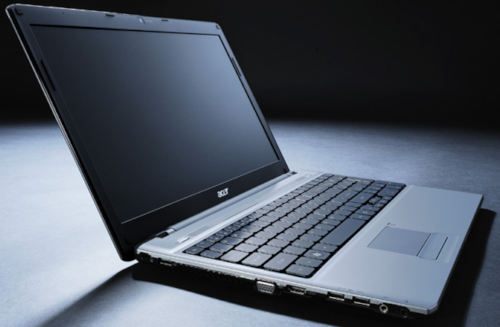 I knew when Steve Jobs pulled that MacBook Air out of the envelope on stage at WWDC that the new wave of popular notebooks would be thin machines. It took a few months after we first laid eyes on the MacBook Air, but eventually we saw Windows machines that were thin and sexy start to trickle onto the market.

Today we have the thin, sexy and expensive Dell Adamo, but with the current economy, who wants to spend thousands of dollars on a notebook? - Acer has unveiled a line of its own thin notebooks that have great battery life and a wealth of other features.

Today we are looking at the Acer Aspire Timeline 4810T-8480, which we will just call the Timeline from here on out. Acer promises all day computing on a single charge and the machine is thin and nicely designed as well. If you are in the market for a thin and sexy notebook that won't break the bank, the Timeline we are checking out today may be just what you need. Read on for all the details.

The Timeline 4810 series has multiple configurations that are available. The config I am reviewing is priced right at about $700 U.S. online and has enough power to do just about anything you want.

Check out the list below for full specifications of the Timeline. The notebook I am testing has an Intel Core 2 Solo SU3500 CPU, 4GB of RAM and a 320GB HDD. 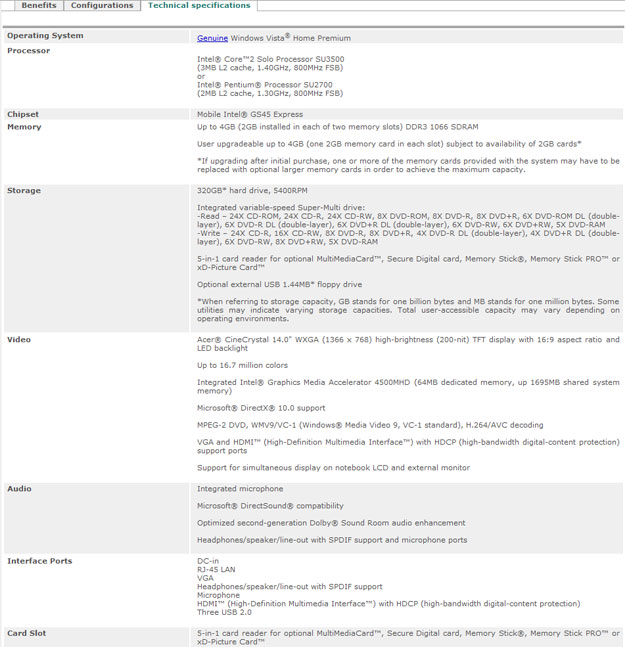 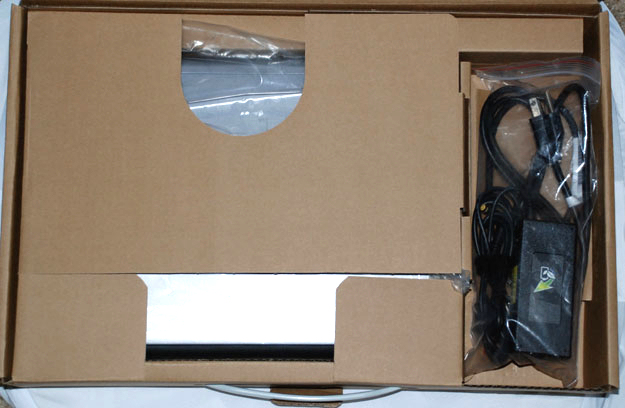 Open the lid to the box and the Timeline is packed away well along with its AC adapter and battery. 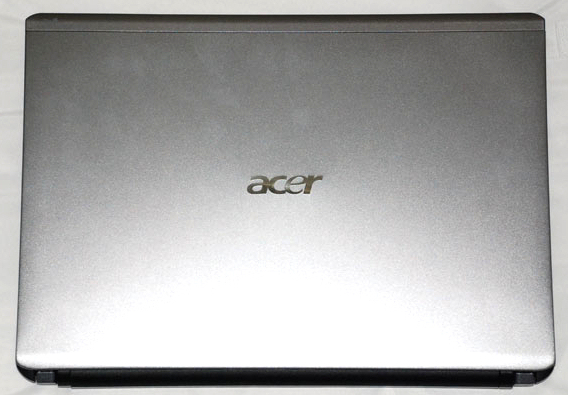 Pull the thin little notebook from its wrapping and you are greeted with the first glimpse of the silver plastic top. It looks rather like aluminum, but isn't.

This is a shot of the rear of the notebook. That rounded black bit you see there is the battery.

The right side of the notebook is nice and thin, but still includes the VGA out, HDMI out and a pair of USB ports along with the audio and mic ports.

There is nothing to see on the front of the notebook other than the release for the screen and a light that glows blue when the notebook is powered up.

The left side of the little machine has the optical drive, USB port, AC port and the RJ-45 jack along with the Kensington lock port. 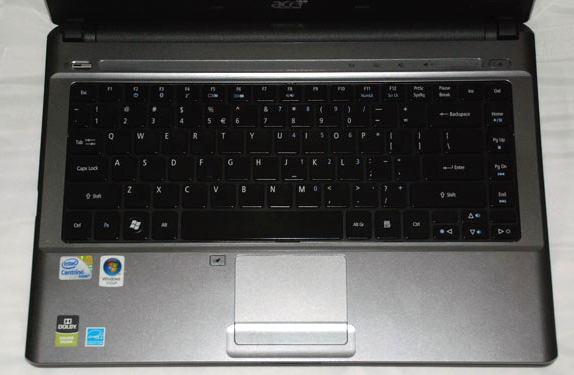 Flip the lid of the notebook up and the keyboard awaits. The keyboard is strange looking, not ugly mind you, but different from any other notebook I have tried. 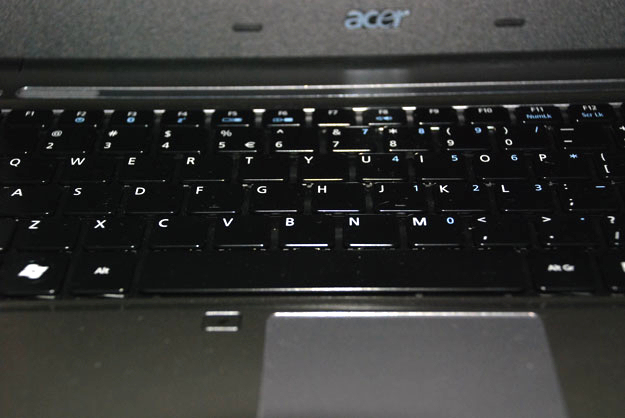 This is a close up of the keyboard. It's hard to tell in these shots, but the keys are flat on top. 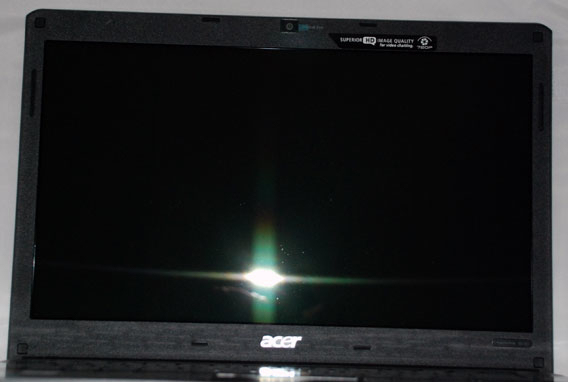 The screen has a glossy coating, which is more common today than the matte finish meaning lots of glare in bright environments from this screen. 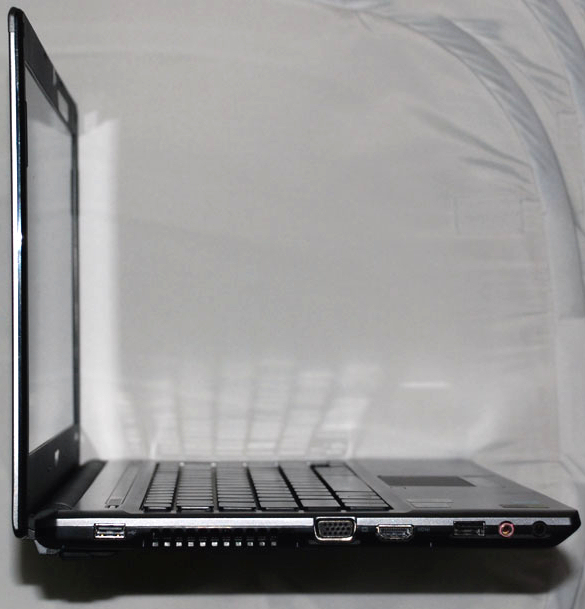 This is a shot of the profile of the machine so you can get an idea of how thin the Timeline is.

With the relatively low resolution of the smaller 14-inch LCD on the Timeline, 3DMark Vantage refused to run. For this review I will be testing the Timeline with PCMark Vantage, iTunes encoding, movie encoding and Battery Eater Pro. First up is PCMark Vantage.

Checkout the screen shot below for the PCMark Vantage results for the Aspire Timeline. 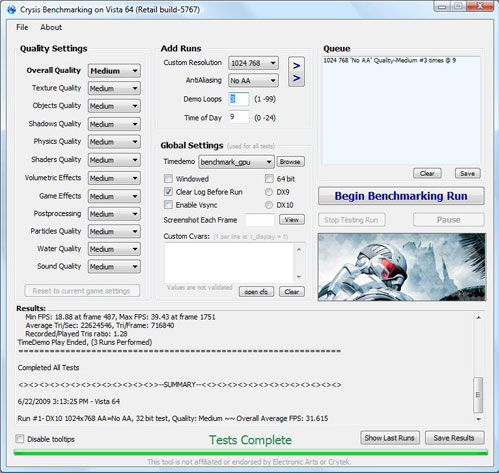 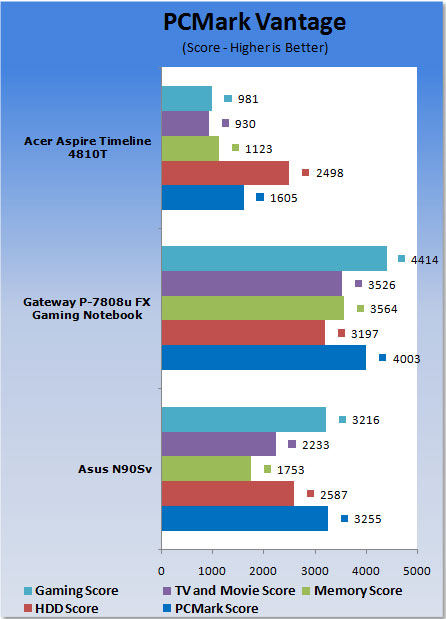 For the iTunes encoding test I used iTunes to encode my STP album from MP3 to AAC format. I timed the process with a stopwatch to get the score. Check out the chart below to see the time for the Aspire Timeline and compare it to the other notebooks I have reviewed. 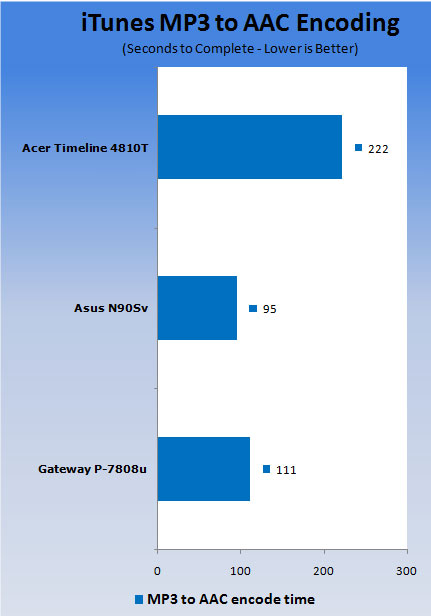 I used WME to encode the HD format Wonder of Flight video to DVD quality video and CD quality audio for playback on a PC. Check out the screen shot and chart below for the results of the test. 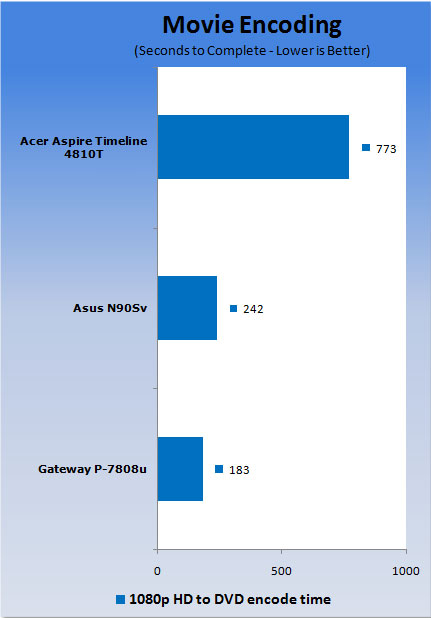 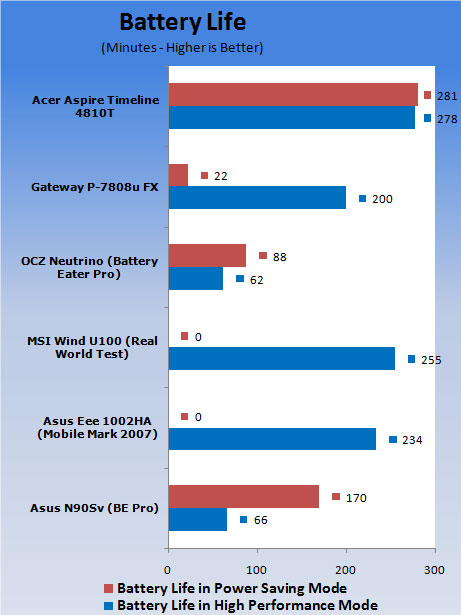 The thing that was most impressive at first glance with the Timeline notebook is how thin the machine is. I really like the thin design and the notebook is very lightweight as well. The machine is well built and doesn't look like the budget notebook that it really is. The notebook has a rather strange looking keyboard. I call it strange because it's not really ugly or hard to use, it's just odd. The keys are highly glossy and appear to float over the underlying keyboard tray.

The key tops are very glossy, smooth and flat making for a different feel than I am used to with most keyboards that have a slight concavity to the tops of the keys. Typing feel for the odd keyboard is good with a tactile feel and a decent click when keys are pressed. After a while, you do forget that the keys are flat.

The 14-inch screen of the notebook is definitely geared more towards multimedia use than general productivity with its glossy finish. I have said it before; I am not a big fan of highly glossy screens because of the glare you have to deal with. You are in for some grief if you try and use the notebook outdoors. The screen works well, though, and has good color reproduction and no major issues with smearing or tearing when watching video online.

One of the big claims that Acer makes with the Timeline is all day computing from a single charge. Acer figures that the battery is good for a full eight hours of use per charge. If you read the benchmark section you know that with Battery Eater Pro and the Timeline set to 50% brightness and Wi-Fi and Bluetooth off I was able to squeeze over four and a half hours from the battery. That is almost half the runtime that Acer promises, but as I said before, Battery Eater Pro is harder on batteries than most people will be in the real world. The battery life of the little machine is very impressive.

To get that impressive battery life you do have to give up some performance, though; the Intel Core 2 Solo processor sips power, but is slower performing than other machines. You do make a tradeoff when you go with a thin machine like the Timeline, but the trade off for the portability and style is one that many notebook users will be more than willing to make.

The machine has a decent onboard sound system that offers enough volume to hear the audio in your music or video from across the room. I was also impressed that the thin machine still offers an optical drive, which is something that you don't find on netbooks that weigh almost as much.

Looking back at my time with the Acer Aspire Timeline 4810T, I came away impressed by the little machine. The Timeline will win no awards for performance, but it is top notch when it comes to portability and battery life. The machine has the longest battery life of any notebook I have tested so far and has a very portable design.

Mobile pros that are in the market for an ultraportable notebook and can stand to make a tradeoff of performance in exchange for portability will find that the Timeline is a very good notebook. The machine offers a fantastic combination of looks, portability, price and battery life that is very hard to match, much less beat, at the $700 asking price the machine can be purchased for. 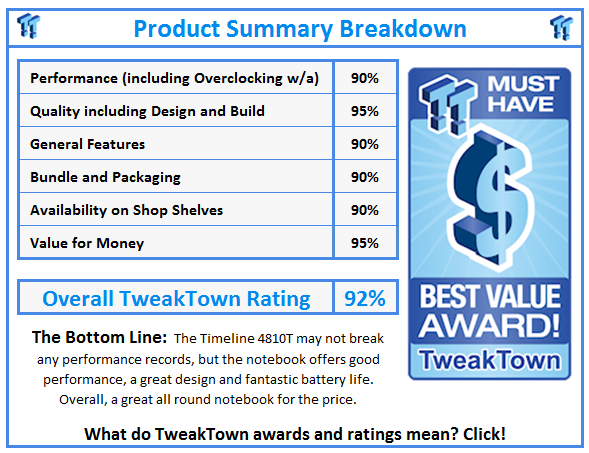