Last year we reviewed Micro Center's first Phison E18 powered SSD the inland Performance Plus. Priced at $379.99 for the 2TB model, it was at the time we reviewed it the best overall value available for a blazing fast Phison E18 controlled SSD capable of more than 7,000 MB/s throughput. That was almost a year ago, and things have changed. Flash is cheaper and faster than ever before, and now M.2 NVMe SSDs are pulling double duty as storage expansion for Sony's wildly popular PlayStation 5 console.

As it is with all Phison E18 controlled SSDs arrayed with B47R Fortis grade flash, the inland Gaming Performance Plus can crank out more than 7,400 MB/s throughput under the right conditions, as evidenced by the following benchmark: 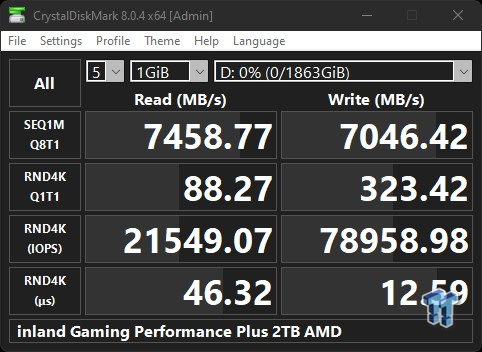 We ran this test on our AMD X570 system with a 5900X 12-core CPU. This hardware combo is capable of extracting every drop of sequential throughput from Phison E18 powered SSDs arrayed with B47R flash.

Sequential throughput is way up thanks to Micron's B47R flash, and sequential speeds are the numbers that most consumers look for as the primary indicator of how fast an SSD is. However, in the consumer realm, sequential speeds are not what make an SSD fast. Low queue depth random read performance is a much better indicator of how fast an SSD really is. So that 88.27 MB/s number on the above benchmark is the most important number to watch. Micron 176 Layer B47R Fortis grade flash is 25 percent faster here than the 96 Layer flash found arrayed on its older sibling. Performance that matters.

Faster, cheaper, and PS5 ready, Micro Center's new inland Gaming Performance Plus is the real deal. Now let's see exactly what it can do for you. 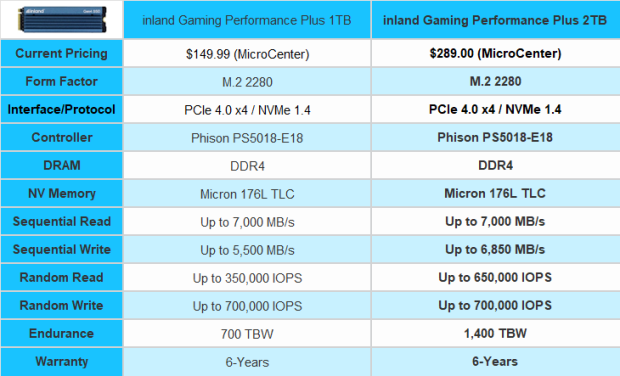 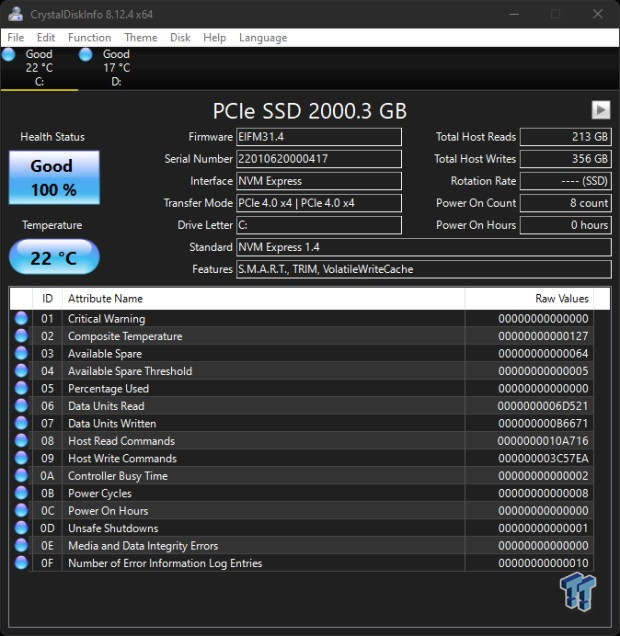 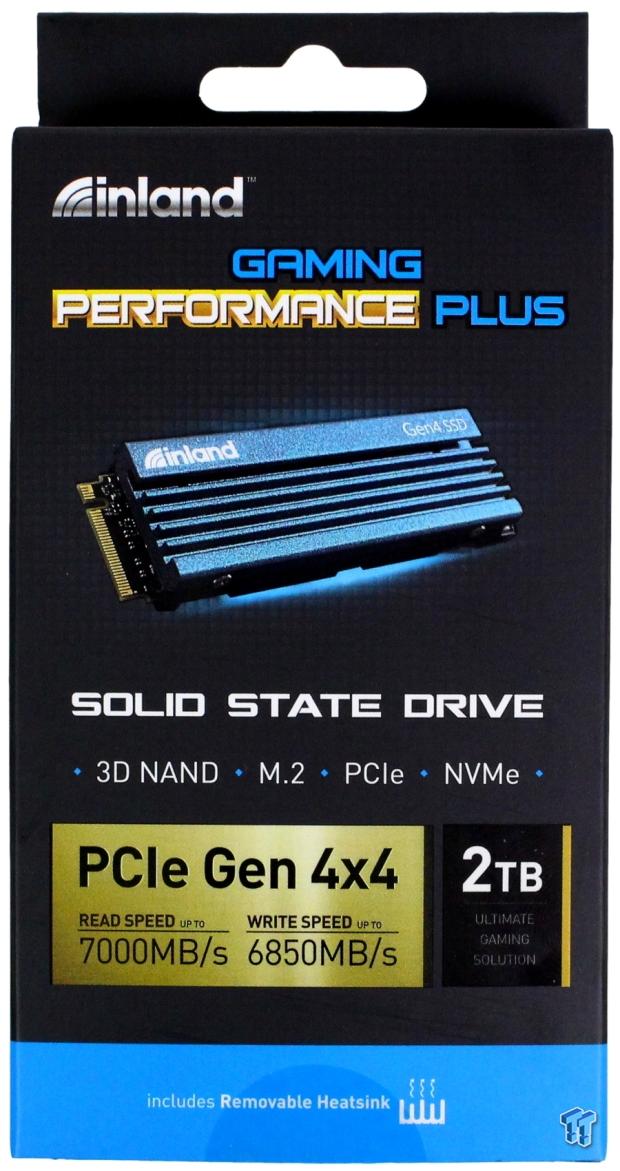 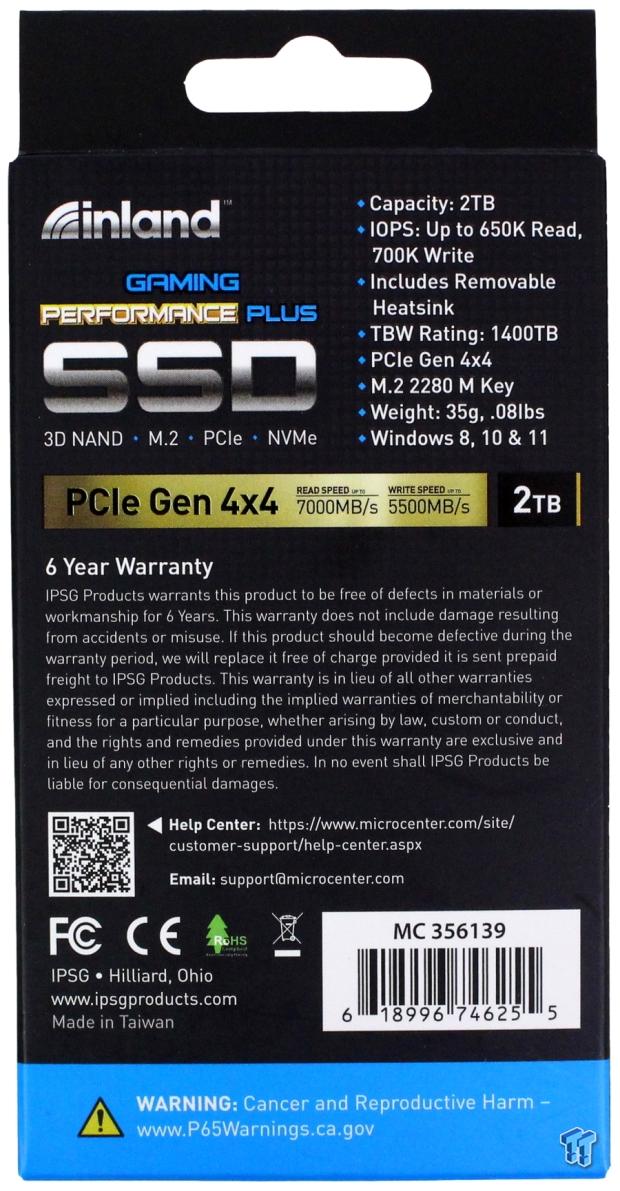 Stated performance capabilities for the inland Gaming Performance Plus are absurdly low. Not sure why Micro Center is being so conservative here, but rest assured that this SSD is every bit as fast as any Phison E18 SSD arrayed with Micron 1,200 MT B47R Fortis grade flash.

Micro Center's inland branded SSDs don't come with value-add software which helps them keep costs lower than the competition. We are fine with this simply because there is plenty of readily available freeware for cloning and monitoring SSD health. A 6-year warranty is the best we've seen offered for any Phison built SSD. Nice. 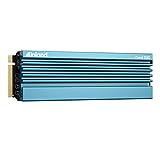 With Sony's PlayStation 5 console now enabled for M.2 NVMe SSDs to be used as fast storage expansion, we include results for PS5 compatible SSDs we test as a part of our reviews going forward. We are using the newest PS5 hardware and software versions. 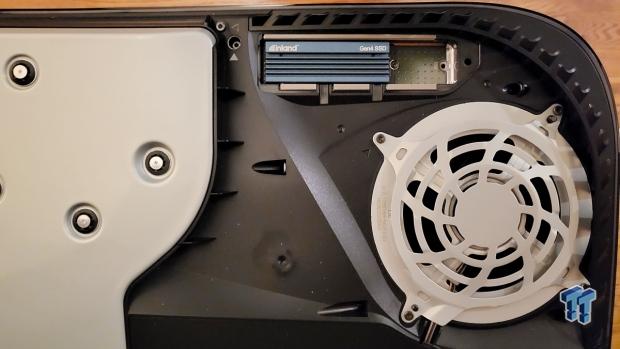 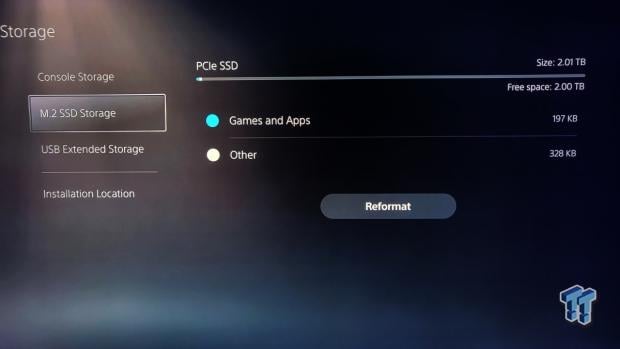 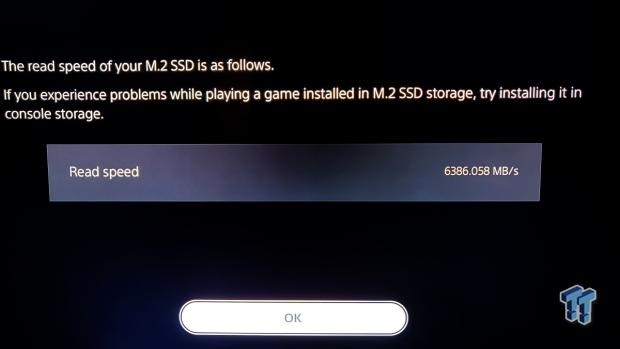 As you can see from our above photo, the inland Gaming Performance Plus with heat sink fits perfectly into the PS5's M.2 storage expansion slot.

Our PS5 chart is exclusively populated by SSDs that can deliver a minimum of 5,500 MB/s read, Sony's original recommendation. We note that with the latest PS5 software update, even SSDs that only do 4,200 MB/s no longer trigger a low-performance warning; nevertheless, we are sticking by Sony's original recommendation of 5,500 MB/s minimum read requirement.

6,386 MB/s is exactly what we expect to get from a 2TB SSD controlled by a Phison E18 and arrayed with B47R 1200 MT Fortis grade flash. Excellent. Keep in mind the only difference between this SSD and similarly configured competitor SSDs is the price. 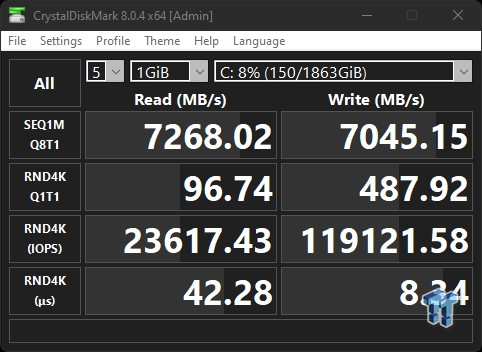 Here we go - lower price, same performance. This is what Micro Center's inland branded SSDs have historically been all about, and their newest is no exception. Excellent. 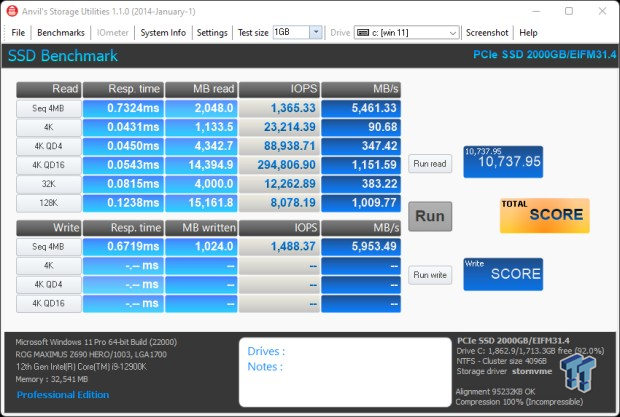 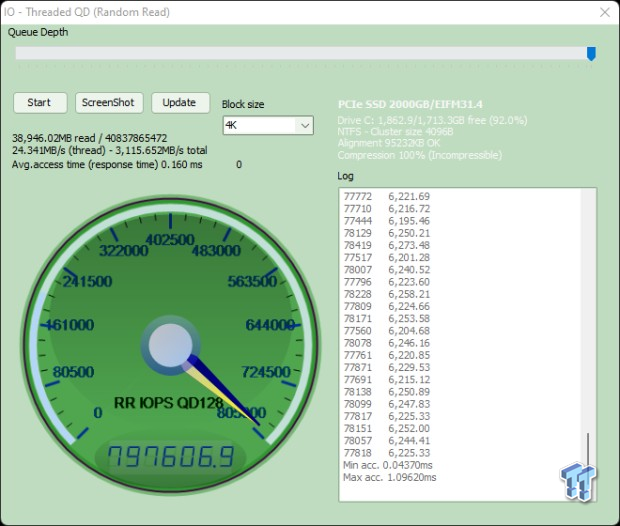 Our inland Gaming Performance Plus is on a roll. It delivers the 10K or better score we are looking for, as well as the highest random read number we've been able to extract from any Phison E18 controlled SSD we've ever tested. Impressive. 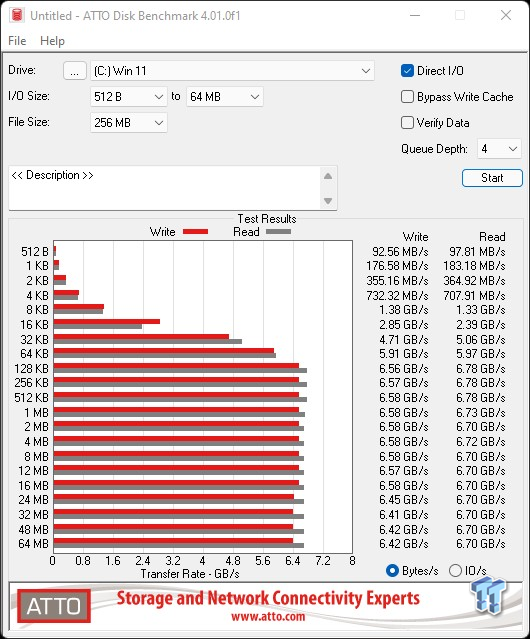 Micro Center's inland Gaming Performance Plus cranks out 128K sequential performance as good as any consumer SSD ever made. 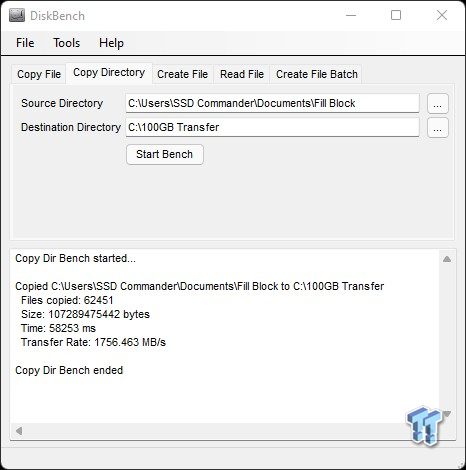 Our write transfer is not your ordinary 100GB of data. Ours is a crushing mix of data composed of more than 62K files. As expected, Micro Center's newest flagship performance offering delivers one of the best performances we've recorded. 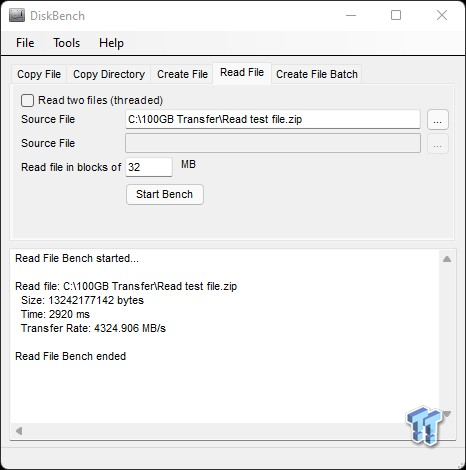 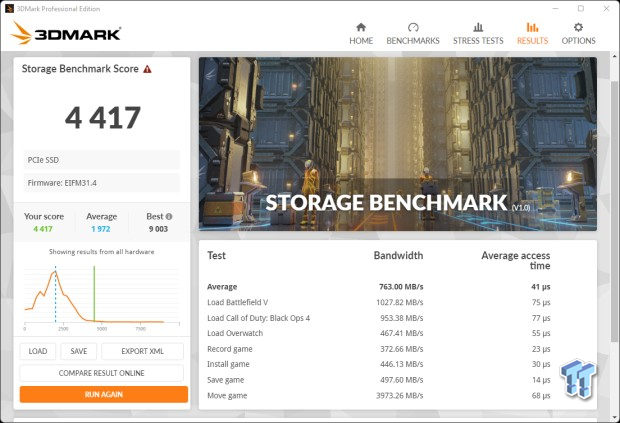 Gaming is a performance metric that matters to the majority of DIY consumers, especially to the enthusiast crowd that TweakTown caters to. Exactly the kind of result we want to see from an SSD marketed at the gaming community. Gaming is in its name, and gaming is its game. PS5 or PC, you simply cannot do much better than a Phison E18 controlled SSD arrayed with B47R flash. 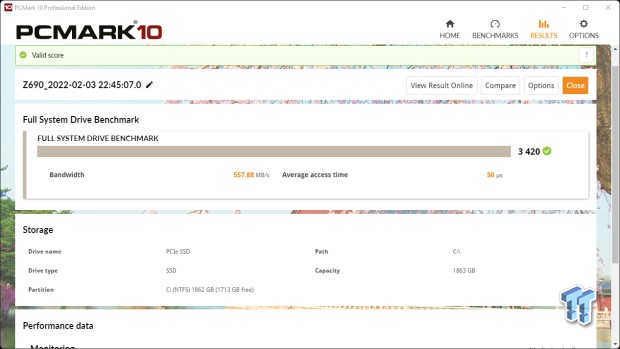 We are looking for a minimum 500MB/s storage bandwidth along with 3000 points here. The inland Gaming Performance Plus produces an impressive score of 3,420. This is performance that matters as it translates directly to user experience. 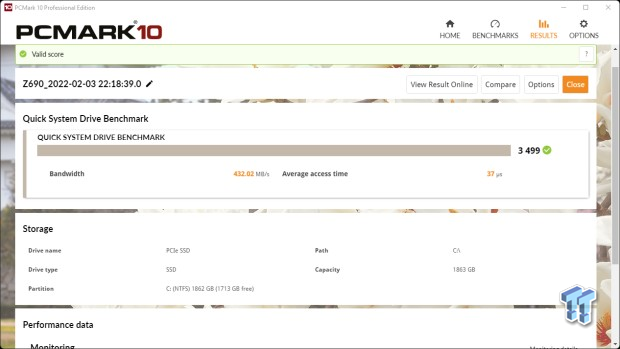 E18 controlled SSDs, with the exception of those arrayed with 1,600 MT flash, severely underperform when tested against PCMark 10 Quick System Drive test. As expected, Micro Center's newest steps on a rake here as well.

Micron's B47R flash has transformed Phison E18 controlled SSDs like the inland Gaming Performance Plus from average-performing into something exceptional. Until recently, Phison E18 controlled SSDs arrayed with Micron's B47R Fortis grade flash have carried a huge price premium with 2TB models like the drive we have on the bench today, costing as much as $500. Finally, we are starting to see significantly lower pricing for this exceptional hardware configuration filter down to the consumer. Micro Center's newest represents the lowest pricing we've seen to date for any SSD sporting the aforementioned hardware combo.

When we saw the price, we figured this SSD was likely configured with Media Grade B47R flash as we've seen from both the T-Force Cardea A440 Pro and AddGame A95. Nope, this value priced SSD is indeed arrayed with full on Fortis grade flash. Outstanding. 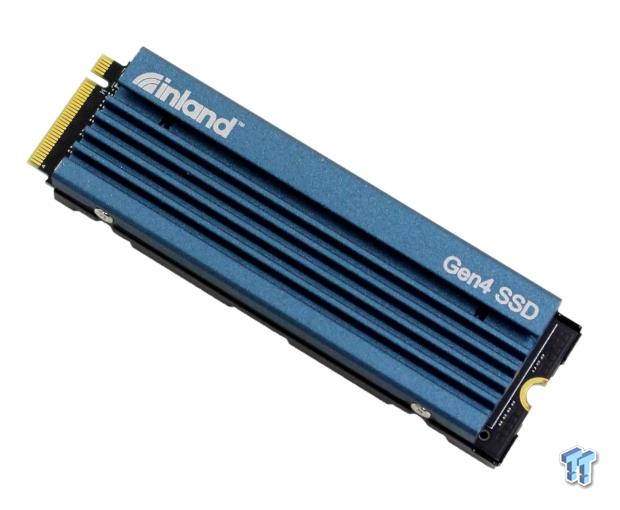 PC or PS5, Micro Center's inland Gaming Performance Plus is a gamers delight. TweakTown Elite performance, heat sink perfectly designed to maximize PS5 performance and the lowest price to date for what it is, have earned it our highest award.