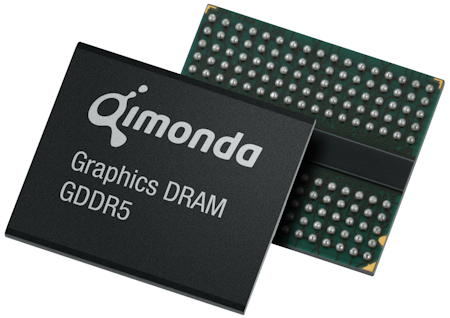 Qimonda also got in contact with us letting us know about their win with AMD as partner for launch of new graphics standard GDDR5 and that component mass production and shipping started.

Qimonda has already started mass production and the volume shipping of GDDR5 512Mbit components with a speed of 4.0Gbps to AMD, a leading global provider of innovative processing solutions in the computing, graphics and consumer electronics markets.

GDDR5 will become the next predominant graphics DRAM standard with a tremendous memory bandwidth improvement and a multitude of advanced power saving features. It targets a variety of applications, starting with high performance desktop graphic cards followed by notebook graphics. Later on also the introduction in game consoles and other graphics intensive applications is planned.

"We are very proud to supply AMD with GDDR5 volume shipments only six months after first product samples have been delivered," said Robert Feurle, Vice President Business Unit Specialty DRAM of Qimonda AG. "This is a further milestone in our successful GDDR5 roadmap and underlines our predominant position as innovator and leader in the graphics DRAM market."

"Qimonda's strong GDDR5 roadmap convinced us to choose them as a primary technology partner for our GDDR5 GPU launch," said Joe Macri, Sr. Director, Circuit Technologies, AMD. "Both the early availability of first samples and volume shipments added great value to the development and launch of our upcoming high-performance GPU."