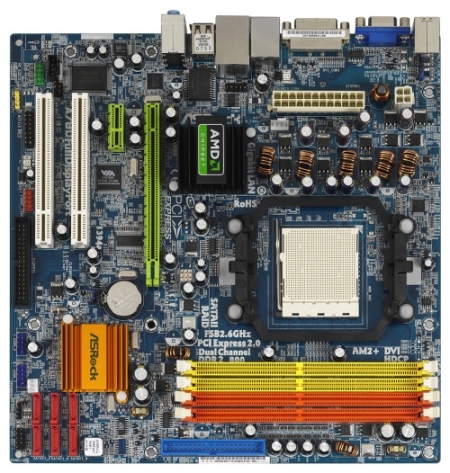 It's the type of situation where this claim is half true and half false. While it is marketed as being the first, the connector is not actually built into the motherboard itself. ASRock bundled the board with a "free" DisplayPort card which plugs into a vacant PCI slot. The A780FullDisplayPort board has a total of two PCI slots, so at least you will have one spare for an old TV tuner or sound card.

Along with its DisplayPort output, it also includes DVI, regular VGA along with HDMI using the included DVI to HDMI adapter. For those looking for the ultimate HTPC based motherboard, you would be hard pressed to find much better than this one right here. Team this board up with an HD Radeon 3450 graphics card and you'll enjoy a 3D performance boost making use of AMD's Hybrid CrossfireX technology, too.

Below ASRock were kind enough to provide an interesting comparison of DisplayPort vs. HDMI. 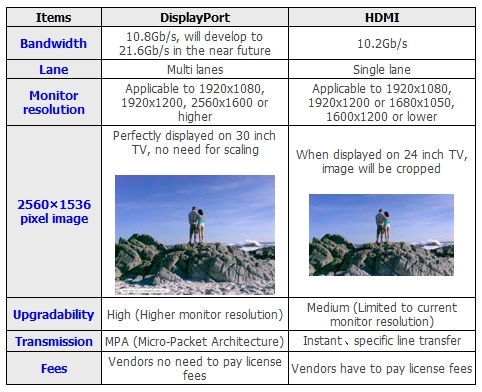 To keep up with the modern appliances with multi-ports, such as D-Sub, DVI, HDMI port and the latest Display port, motherboard makers got to be ready for that. ASRock is fully aware of the trend and released the Worldwide First Display port motherboard today! ASRock A780FullDisplayPort is a full-function embedded motherboard with four display output provided for all kinds of consumer appliances. Through the back panel I/O, you may find many output ports options, such as D-Sub, DVI, HDMI, and Display port, and the MB also supports Full HD 1080p Blu-ray/HD-DVD playback and PCI-E Gen2 slot.

There is more information to be had over at the ASRock press release and product page.