After Sony confirmed that the Playstation portable (PSP) will incorporate a Skype Web phone function that will allow users to phone Skype contacts the world over provided they have the Skype software installed on a PC, or a similarly setup PSP earlier this year, there were issues with the microphone. The move is seen as an attempt to boost sales which are flagging behind Nintendo's DS sales. 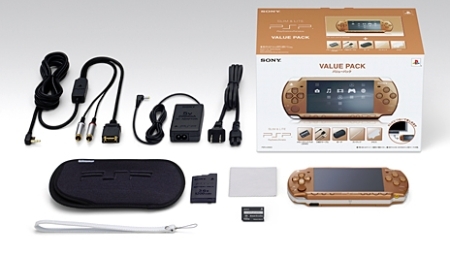 Since Skype is part of eBay Inc, the world's largest online auctioneer, we have to wonder is the next step going to be live auctions on eBay through the PSP device. Companies like Sony seldom do anything with only one track thinking.

According to an article from Reuters, Sony will sell a microphone which is recommended by Skype, provided users adhere to distance recommendations.

The Skype microphone will be available in Japan for the 18 March launch. There will also be a limited edition "Matte Bronze Value Pack" due for sale on 24th April. The picture above is of the value bundle selling for JPY 23,800 according to a game industry article and the bundle will contain a pouch, hand strap, the handheld unit, 32MB Memory Stick Duo, a D Terminal AV cable and a cloth.
Newsletter Subscription