Sam Bankman-Fried has taken to his Twitter account to reveal that he won't likely be attending the upcoming US House Committee hearing regarding the collapse of FTX. 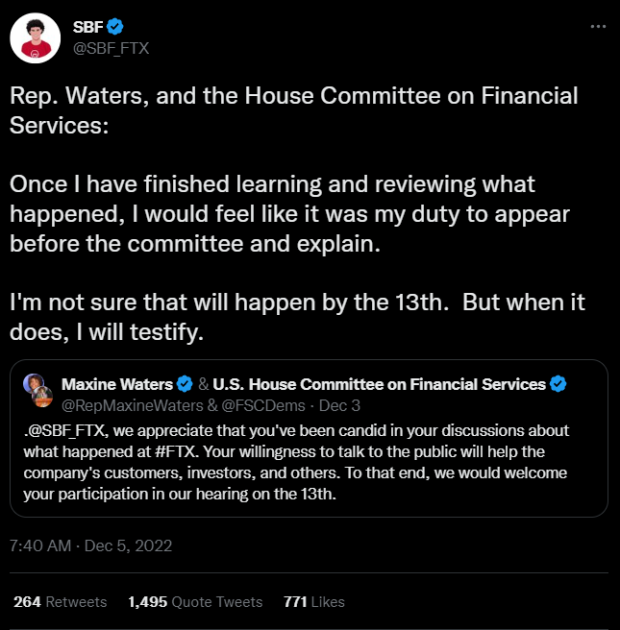 Sam Bankman-Fried (SBF), the former CEO of what was the world's second-largest cryptocurrency exchange before it went bust, FTX, has taken to his personal Twitter account to announce that he is still "learning and reviewing what happened" to cause the collapse of his cryptocurrency exchange, and that once he has finished figuring out what happened, he will appear in front of a House Committee. SBF has been accused of misappropriating customer funds, hence the investigation launched by the US House Financial Services Committee last month.

The US House, Financial Services Committee, is planning on holding a hearing in December where multiple people and companies involved in the collapse of FTX will speak, including people from Alameda Research, FTX's sister company that's closely tied to the collapse of the crypto exchange, Binance, which a major player in its downfall, and more. Many cryptocurrency investors believe that SBF is currently getting away with one of the biggest frauds in history, which is why many crypto holders hoped they would get some clarity on what happened at FTX at the upcoming House Committee hearing.

"Rep. Waters, and the House Committee on Financial Services: Once I have finished learning and reviewing what happened, I would feel like it was my duty to appear before the committee and explain. I'm not sure that will happen by the 13th. But when it does, I will testify," wrote Sam Bankman-Fried on Twitter.