NASA has taken to its blog to announce that it lost communication with the Orion capsule on November 23, but everything seems to still be in working order. 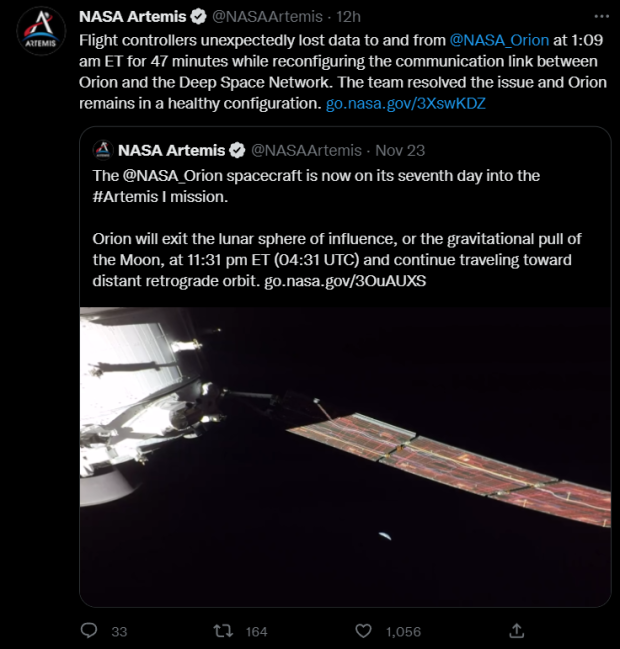 According to the announcement made on NASA's social media channels as well as its blog on its website, NASA's Mission Control Center located at the agency's Johnson Space Center in Houston lost communication with the Orion capsule for 47 minutes as officials were unable to send or receive data from the spacecraft.

The space agency writes that teams have conducted a reconfiguration of the communication link between the Deep Space Network and Orion, with NASA writing that these repairs were "successful", and that an investigation has been launched into what caused the issue. Additionally, NASA explains that teams are currently sifting through data from the communication outage event to assist in finding the root cause, and add to the overall assessment.

Despite the temporary drop in communication, NASA writes that the Orion capsule didn't sustain any damage and remains in a healthy condition. As for what Orion has planned next, the capsule is currently preparing to conduct a crucial maneuver scheduled to occur on November 25, which will push the spacecraft into orbit around the Moon, more specifically, "distant retrograde orbit".

NASA explained in a recent blog post what "distant retrograde orbit" means, and according to the space agency, the orbit is "distant" because of how far away Orion is from the surface of the Moon, and it's retrograde because Orion will be traveling in the opposite direction the Moon orbits Earth. Notably, Orion has already left the gravitational influence of the Moon, specifically on November 22 at 9:49 pm CST, and is expected to be at its farthest distance from the Moon on Friday, November 25.

Orion is moving at about 2,837 miles per hour, and for more information on the spacecraft check out the above links.