Twitter has been hit with another departure from a top executive that on her way out, took a swing at Twitter owner Elon Musk over the changes he's made at the company. 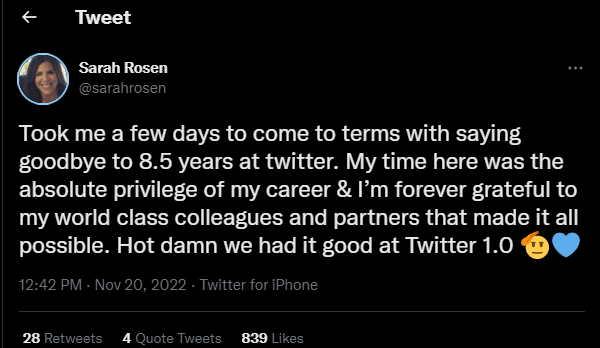 The top Twitter executive is Sarah Rosen, the head of Twitter's US content partnerships, who has spent the last 8.5 years at the company. According to a tweet from Rosen, the former Twitter executive has spent the last several days coming to terms with saying "goodbye to Twitter", with Rosen adding that her time at the company was an absolute "privilege of my career" while also thanking her colleagues and partners she was able to work with throughout her employment.

Before Rosen rounded up her tweet, the former head of Twitter's US content partnerships seemingly took a swing at Musk's vision for Twitter, writing, "hot damn we had it good at Twitter 1.0", which seems to be a reference to Musk's announced Twitter 2.0 vision that includes mass restructuring at the company, overhauls, increased workload, and much more. Notably, Rosen used a salute emoji along with a blue heart emoji at the end of her tweet, which seems to be what lots of former Twitter employees are using to say goodbye to the company.

In other Twitter news, Elon Musk recently closed Twitter offices on all employees following mass resignations over an email he sent out to all staff at the company. The email required all staff to agree to work long hours at "high intensity" and that "exceptional performance" would only be accepted as a passing grade. If workers didn't agree to these new policies outlined by Musk in his email, they would receive three months of severance, effectively forcing them to resign from the company.

Additionally, Musk's email revealed that Twitter would be shifting toward a more engineer-focused mindset and that engineers who are able to write "great code" will make up the majority of the team while also having the biggest sway when it comes to decisions. Notably, Musk locked the Twitter offices as he was concerned there could be physical sabotage to Twitter servers and to ensure the safety of every Twitter employee, according to a current Twitter employee that spoke with Insider.

If you are interested in reading any more on the Elon Musk-Twitter rollercoaster, check out the below and above links.