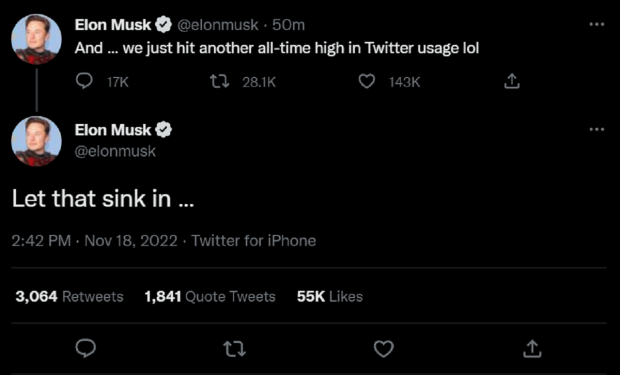 It was only on November 10 that Musk took to his Twitter account to announce that Twitter usage had reached an all-time high, while writing that he hoped the servers didn't melt. Musk didn't provide any specific metric he was going by, and the Tweet on November 18 where he announced that Twitter had broken that record and "hit another all-time high in Twitter usage lol".

Musk followed up that Tweet with a call back to his joke of bringing an actual sink into Twitter HQ while also writing on his Twitter, "let that sink in!", after he closed to deal for the company. Shortly after the announcement of Twitter's usage hitting a new all-time high, the SpaceX CEO wrote once again, "let that sink in..."

With Twitter usage at new milestone levels, Musk has sent out an email to all staff at Twitter demanding that they commit to "hardcore" work that entails "exceptional performance" as a "passing grade", or take three months of severance now and leave their job. Anyone that didn't agree to Musk's new terms via clicking the link in the provided email by 5 pm on November 17 will receive their three months of severance.

Musk has recently admitted during an interview that he is working "too much" and that his workload has "increased quite a lot," which has pushed him to "really working the absolute most amount that I can work, from morning 'til night, seven days a week". Additionally, Musk said on his Twitter account that he will be sleeping at Twitter headquarters in San Francisco until the company is organized. Furthermore, the Tesla CEO announced that Twitter will be relaunching its Twitter Blue subscription service, with the new launch date being set for November 29.

In other Elon Musk news, the Twitter owner has recently commented on the downfall of the FTX cryptocurrency exchange at the hands of Sam Bankman-Fried (SBF), the co-founder and former CEO of FTX. Musk revealed his SBF attempted to get into contact with Musk earlier in the year and that Musk's "bs detector" was set off by what he heard about SBF.

As for SBF, the co-founder of FTX has been explaining his point of view on the spiraling downfall of his company on his own Twitter account while also outlining a plan to "restart". SBF has outlined some goals that some of the public have viewed as ironic, considering they are centered around customer safety, which, if taken into consideration initially, wouldn't have gotten the company to where it is today, bankrupt.