NASA has shared a Halloween-themed image taken by the famous Hubble Space Telescope, and the photograph showcases a "ghost" out in deep space.

Originally posted to NASA's website in 2020, but re-shared to the space agency's NASA Goddard Twitter account on October 26, is a photograph of the nebula officially known as IC 63. This nebula located 550 light-years from Earth within the constellation Cassiopeia the Queen has been nicknamed the "Ghost Nebula" for its shape and appearance.

NASA explains in its blog post that the brightest stars within nebulae give off large amounts of radiation that eats away at the large clouds of hydrogen gas, which is the raw material used to create stars. This interaction between radiation and hydrogen gas causes an "etching process" that creates gorgeous landscapes such as the one seen below. 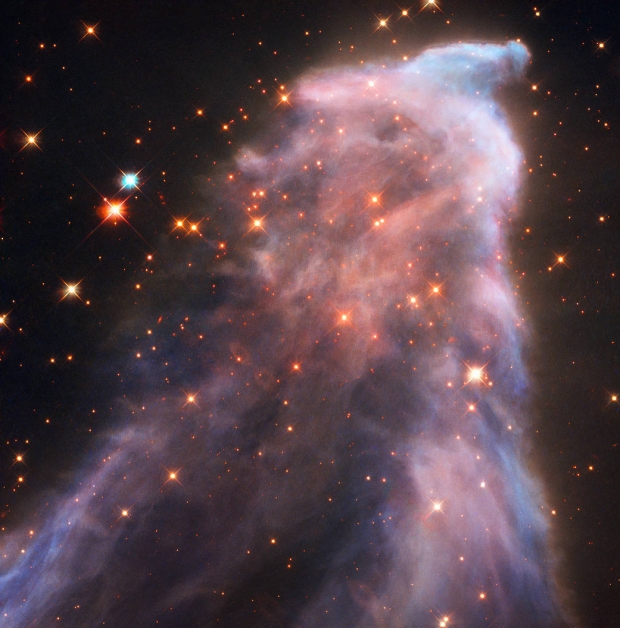 "The brightest stars embedded in nebulae throughout our galaxy pour out a torrent of radiation that eats into vast clouds of hydrogen gas - the raw material for building new stars. This etching process sculpts a fantasy landscape where human imagination can see all kinds of shapes and figures. This nebula in the constellation of Cassiopeia has flowing veils of gas and dust that have earned it the nickname "Ghost Nebula," writes NASA.

Within these landscapes humans can experience a phenomenon called pareidolia, which is the tendency for perception to impose a meaningful interpretation in an object where there is none. An example of this is looking at clouds and seeing a face where there actually is none.