Bethesda is celebrating Fallout's 25th anniversary with unique retrospectives on the franchise's history, and recollects what it was like to show Fallout 3 to the franchise's original creator Tim Cain.

Back in 2007, Bethesda Softworks bought the Fallout franchise from Interplay for $5.75 million, a paltry sum for what is now assuredly a billion-dollar series. The studio had been knee-deep in development on Fallout 3, which would bring Fallout to the 3D world for the first time ever. A year later Fallout 3 was finished, and Bethesda wanted to know what the original Fallout creators thought of their creation...so they invited Tim Cain to a premiere of the game. Everyone at Bethesda was sweating bullets, nervous about Cain's response and wanting approval for their direction of the series.

"I remember this very vividly, sitting at a table asking Tim Cain what he thought of the demo that we just saw...and the whole time you're just crossing fingers and toes like 'oh please, don't hate it!" Bethesda's Pete Hines said with emphatic emotion, as per usual from Uncle Pete.

Cain had some feelings about Bethesda taking control of Fallout. 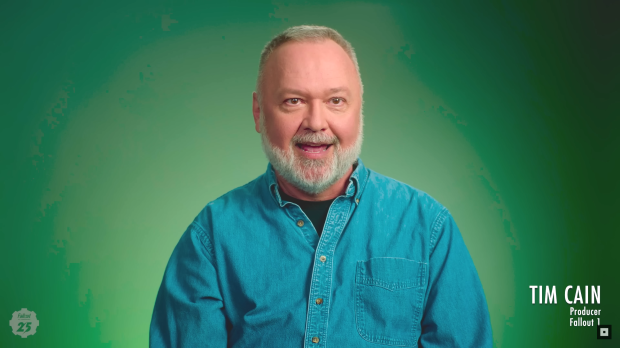 "I kind of fell like my baby had been adopted by another family. It wasn't so much that I didn't like the family, my baby was going to be raised differently than how I would raise this baby," Cain said.

All the worry was for nothing. Cain absolutely adored Bethesda's vision for the game, and Fallout 3 became a critical and landmark success for the video games industry.

"I just watched in a trance because I got to watch the opening cinematic and it was gameplay. It was Fallout in first-person, and it was mesmerizing, it was immersive, it was incredible," Cain said.

"Even when I saw the VATS system, I'm like that is what our called-shot system would be like if you converted it to a first-person role-playing game. It was great."

"I especially love when you got to leave the vault and the light cam1e up and you saw the Wasteland. I was like...'I'm seeing Fallout in 3D.' It was an amazing experience for 2008."

"That was a big watershed moment in some way. Wanting to do right by Fallout and go back to the folks that came up with this stuff and be like 'hey, here's what we're doing'," Hines said with excitement.

And that's how history was made. Now begins our long, long wait for Fallout 5...