Located just 5,000 light-years away from Earth, which is a relatively short distance when considering the universe's vastness, are a pair of stars known as Wolf-Rayet 140.

NASA's James Webb Space Telescope (JWST) has pointed its extremely advanced instruments at the star duo and photographed a remarkable event. The image showcases seventeen concentric dust rings emanating from the two stars, with each ring being created when the two stars came close to each other and their stellar winds meet, compressing the gas and forming space dust.

NASA explains in its blog post that the dust rings are much like the growth rings on a tree's trunk as they represent a passage of time. This event only happens once every eight years when both of the star's orbit's come close together. Ryan Lau, an astronomer at NSF's NOIRLab and lead author of a new study recently published in the journal Nature Astronomy that focuses on the star system, said that Webb's image illustrates just how sensitive its instruments are, because researchers were only able to see two dust rings with ground-based telescopes. 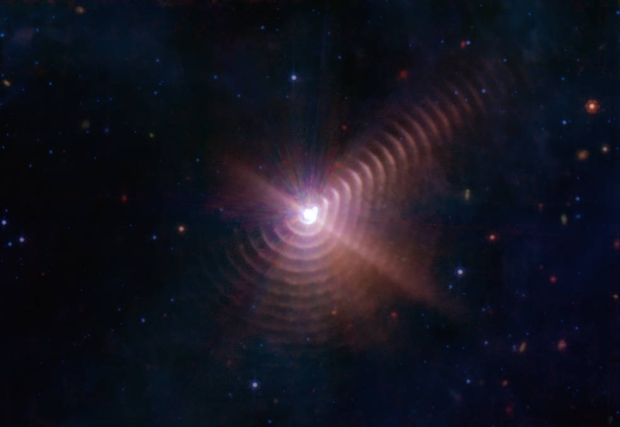 How is Dust Made Out of Star Wind?

"Transforming gas into dust is somewhat like turning flour into bread: It requires specific conditions and ingredients. The most common element found in stars, hydrogen, can't form dust on its own. But because Wolf-Rayet stars shed so much mass, they also eject more complex elements typically found deep in a star's interior, including carbon. The heavy elements in the wind cool as they travel into space and are then compressed where the winds from both stars meet, like when two hands knead dough.

Some other Wolf-Rayet systems form dust, but none is known to make rings like Wolf-Rayet 140 does. The unique ring pattern forms because the orbit of the Wolf-Rayet star in WR 140 is elongated, not circular. Only when the stars come close together - about the same distance between Earth and the Sun - and their winds collide is the gas under sufficient pressure to form dust. With circular orbits, Wolf-Rayet binaries can produce dust continuously," explains NASA.