Samsung has just hosted its recent Samsung Tech Day 2022 event, where the company updated the world on its work on next-gen GDDR7 memory.

The company hosted its Samsung Tech Day 2022 event in-person for the first time in 3 years, at the Signia by Hilton San Jose, California, where the South Korean giant talked about everything it is working on: 5G models, 200-megapixel ISOCELL HP3 camera sensors, DRAM and NAND flash memory, next-gen GDDR7 memory, and so much more. 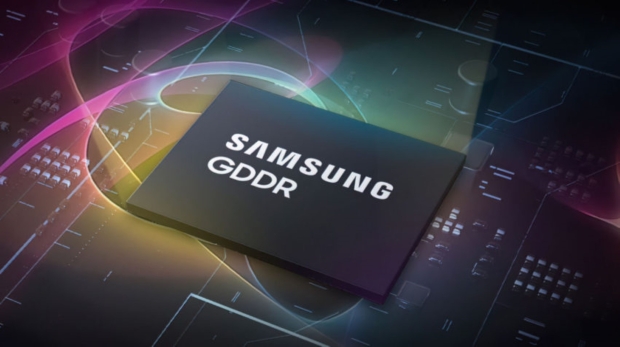 Samsung talked about its next-gen DRAM solutions during the Samsung Tech Day 2022 event, where it has 32Gb DDR5 DRAM, and 8.5Gbps LPDDR5X memory, but this is the doozy: totally next-gen 36Gbps GDDR7 DRAM for the data center, HPC, mobile, gaming and automotive market segments.

The last we heard on GDDR7 memory was from Samsung this time last year, in Novemebr 2021 when the company teased next-gen 32Gbps GDDR7 memory... but this is newer, faster 36Gbps GDDR7 memory. To refresh your memory, the current-gen Ampere-based NVIDIA GeForce RTX 3090 Ti has 24GB of GDDR6X memory at 21Gbps, so too does the next-gen Ada Lovelace-powered GeForce RTX 4090 (the same 24GB GDDR6X @ 21Gbps).

So this would represent a huge 71% increase in memory bandwidth over the fastest GDDR6X right now and for the foreseeable future. We're already breaching 1TB/sec+ on a 384-bit memory but with 21Gbps GDDR6X memory, we should expect somewhere in the vicinity of 1.7TB/sec through to 2TB/sec and beyond with 36Gbps GDDR7 memory, especially on wider memory buses and next-gen GPUs.

We should expect to hear more, and hopefully, see more of Samsung's next-gen 36Gbps GDDR7 memory in 2023. I'm sure that NVIDIA would be first to use the fastest VRAM on the planet once again.

In fact, earlier this year I reported on leaks from Moore's Law is Dead, who said that NVIDIA's next-gen AD102-based GeForce RTX 4090 could... not would, but could use GDDR7 memory. MLID explained that the memory controllers in Ada Lovelace dies are "vastly improved over Ampere, with AD102 being built to support GDDR7 memory speeds, and possibly GDDR7 itself".

MLID's source explained that the AD102 memory controller was designed to handle GDDR7 memory speeds (of up to 32Gbps at the time, with 32Gbps GDDR7 the fastest teased earlier this year) and possibly "built around an early 0.x GDDR7 specification".

But get this... back in that news from March 2022, MLID's source said that it would be unlikely that GDDR7 memory would be ready for Ada Lovelace's initial launch, and that a "full refresh" in 2023 would feature "vastly higher memory bandwidth if they need to rush out an RTX 5000 series after defeat... just like Fermi...".

NVIDIA's new GeForce RTX 4090 is an amazingly powerful graphics card, but AMD is waiting in the wings with its next-gen RDNA 3-based Navi 31-powered Radeon RX 7900 XT graphics card. The rumors on Navi 31 is that AIB partners are going to be clocking the next-gen GPU "to the moon"... where we could expect to see 4GHz GPU clocks.

The new AD102-powered GeForce RTX 4090 is expected to breach 3.0GHz, with NVIDIA founder and CEO Jensen Huang confirming during the Ada Lovelace GPU launch that Ada has been pushed past 3.0GHz inside of NVIDIA's own labs. Oh boy.