A study on the building of the pyramids titled "Nile waterscapes facilitated the construction of the Giza pyramids during the 3rd millennium BCE" has been published in the journal PNAS. 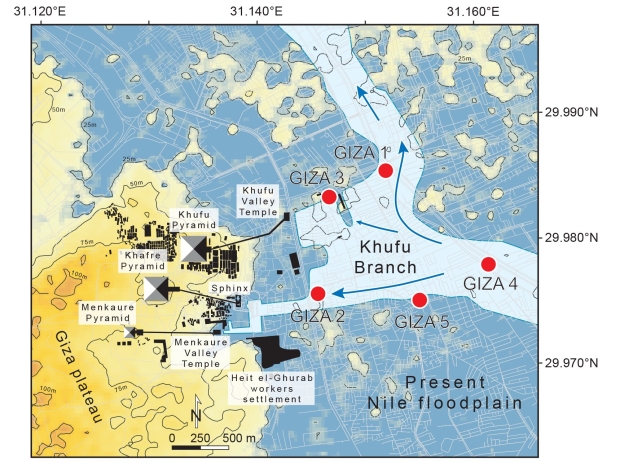 Location of the cores on the Giza floodplain.

A French research team has discovered evidence of how the ancient Egyptian civilization took advantage of the Nile River to transport giant stone blocks into position when assembling the pyramids in Giza. The researchers hypothesized that the ancient Egyptians developed a port complex that would enable them to utilize annual flooding from the Nile River to move building materials to the base of the pyramids, and created waterways to connect the area to the river.

"To edify the plateau's pyramids, tombs, and temples, it now seems that ancient Egyptian engineers took advantage of the Nile and its annual floods, using an ingenious system of canals and basins that formed a port complex at the foot of the Giza plateau," wrote the study authors.

The Nile River, as it exists in the present day, exists over 7 kilometers (4.3 miles) east of the hypothesized port complex that would have been a hub for the Khufu, Khafre, and Menkaure pyramids. Core samples from present-day Giza sourced from modern engineering works in the area reveal rock layers consistent with a Nile River branch reaching toward the base of the pyramids.

The five core samples obtained also contained fossilized pollen grains that belong to plants found along the banks of the Nile River today, indicating the Nile River once had a permanent waterbody flowing through the region, facilitating the construction of all of the pyramids around 4,000 years ago. However, after the reign of King Tutankhamun, water levels dropped substantially, creating a much more arid environment.

"The Khufu branch remained at a high-water level... during the reigns of Khufu, Khafre, and Menkaure, facilitating the transportation of construction materials to the Giza pyramid complex," the researchers continued.

The Great Pyramid of Giza: A History From Beginning to Present