Intel will be launching its new 13th Gen Core "Raptor Lake" CPUs later this year, led by the flagship Core i9-13900K, which will all work in existing 600-series motherboards. But... there are new 700-series motherboards we've been hearing about since June 2021 with rumors from over a year ago, and now there are some fresh leaks. 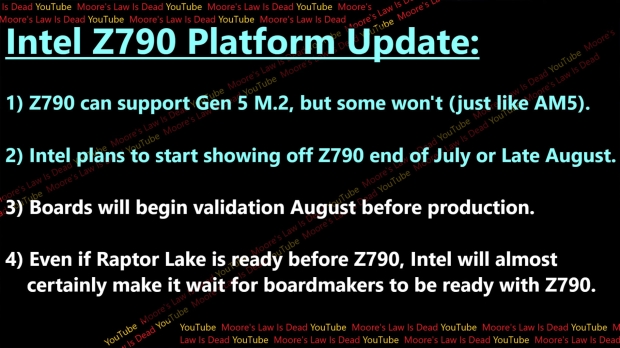 In a fresh new video, Tom @ Moore's Law is Dead says the new Intel 700-series chipset would be led by the flagship Z790 chipset, which would feature support for super-fast PCIe 5.0 SSDs. This would bring Intel to the same level as AMD with enthusiast-class consumer chipsets, as the upcoming AMD X670E chipset and its X670E-powered motherboards will support both PCIe 5.0 SSDs and a PCIe 5.0 GPU.

But just like AMD and its AM5-based motherboards, some of the new Intel Z790-based motherboards won't have PCIe 5.0 SSD support. You'll still have PCIe 5.0 x16 on some of those boards, but it'll only work with a PCIe 5.0-ready GPU. Speaking of which, AMD's next-gen RDNA 3-based Navi 31-powered Radeon RX 7970 XT (or whatever it ends up getting named) will reportedly be on the new PCIe 5.0 x16 standard.

AMD's new X670E chipset was explained in the above article: we can now tell you that the X670E will be a special SKU where the E stands for Extreme. Based on the information we've managed to source, it doesn't seem to differ from the X670 chipset in terms of functionality or features. However, all X670E motherboards must offer PCIe 5.0 connectivity to both the GPU and the M.2 NVMe SSD slot or possibly slots, whereas X670 based motherboards can use PCIe 4.0 instead. 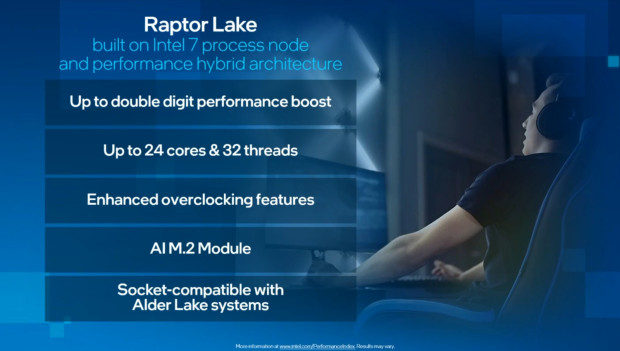 Intel's next-gen Raptor Lake CPUs will arrive with up to 24 cores and 32 threads, with Intel promising "up to double digit performance boost" as well as "enhanced overclocking features". There'll be a new AI M.2 module, while Raptor Lake will be socket-compatible with Alder Lake systems (no motherboard upgrade).