Atari is one of the most recognizable brands on the planet. Even after decades of not releasing new consoles, Atari has a long-lasting 50-year legacy that spans multitudes of games, hardware, and merch, and was arguably created the foundation of modern gaming as we know it today. Every legacy needs an icon, and for Atari and the rest of the industry, the Fuji logo became synonymous with gaming.

"When we chose the Fuji logo, I wanted it to be an upward swoosh. It's a collective. It's aspirational. So right now it would be good to take the innovation legacy and push it forward into the future," Atari founder Nolan Bushnell said in a recent 50th Anniversary video.

George Opperman, who created the Atari Fuji logo, said the logo really had nothing to do with Japan's famous mountain. Instead, the logo was meant to look like the letter A, or represent a Pong board. 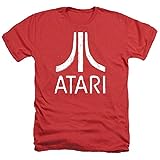