The GAE88GTS 512MB is equipped with the higher level G92-400 chip in comparison with GeForce 8800GT. The folks at Chaintech reckon what makes this card special is its heavy-duty dual slot cooler and extra shaders on tap for optimizing the cooling performance and for noise reduction. 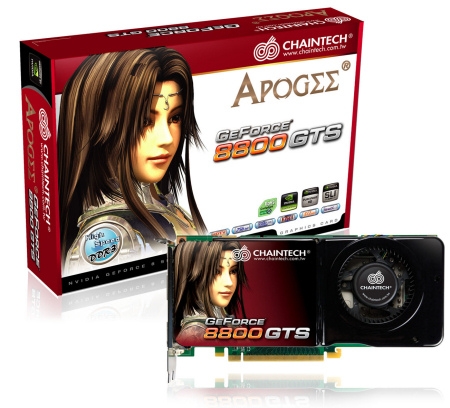 The card is also born with the latest PureVideo HD technology from NVIDIA, CHAINTECH GAE88GTS 512MB leverages the revolutionary video processing engine to playback the highest quality of HD DVD and Blu-ray movies using lower CPU, besides, it is able to perform at the minimum power consumption, heat and noise. Additionally, CHAINTECH GAE88GTS 512MB comes with PCI Express 2.0 interface which supports for the next generation PC platform. The most realistic gaming effects can also be brought by this card for its utilization of the latest DirectX 10.1.