Intel has teased its next-gen Rialto Bridge data center GPU a the International Supercomputing Conference in Germany, for next-gen AI and HPC dominance. Check it out: 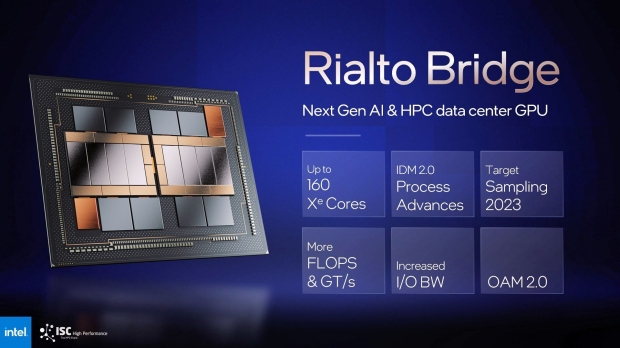 The new Intel Rialto Bridge GPU will succeed the upcoming Ponte Vecchio GPU that launches later this year, where Rialto Bridge will pack up to 160 Xe-Cores, and enhanced tiles on the next-gen Intel process node. Intel teases increased density, performance, and efficiency but wasn't clear on the process node: spoiler alert, expect Intel 4.

Intel's upcoming Ponte Vecchio GPU has up to 128 Xe-Cores, with the new Rialto Bridge GPU packing up to 160 Xe-Cores we have a 25% increase in core count. We will see the company most likely using super-fast HBM3 memory on Intel Rialto Bridge, as Intel has promised "increased I/O" bandwidth -- without numbers to back it up.

For comparison, Intel's upcoming Ponte Vecchio GPU has 128GB of HBM2e memory on an 8192-bit memory bus, with 600W of power. 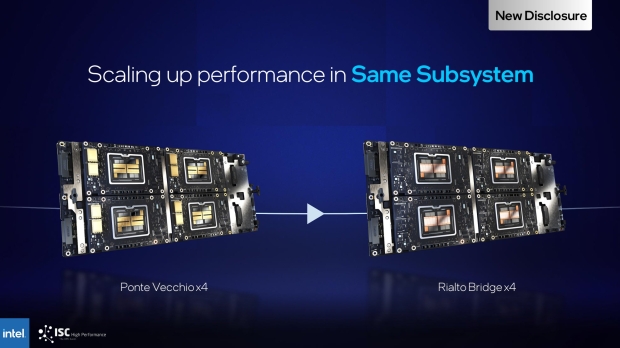 Intel's next-gen Rialto Bridge GPU will be better in every way, with the company aiming for up to 30% performance boosts in applications (but didn't say which ones, of course). Expect higher GPU clocks, more memory bandwidth, and improvements with the new node process used.