The image released by NASA to celebrate Hubble's 32nd birthday features The Hickson Compact Group 40, a collection of five closely gathered galaxies. Three of the galaxies are spiral-shaped, one is elliptical, and one is lenticular, meaning lens-like. They are close enough together to fit within a region of space that spans less than twice the diameter of the Milky Way's stellar disk.

Other close groupings of galaxies can be found deep within large galaxy clusters elsewhere in the universe, but The Hickson Compact Group 40 is one of the most densely clustered. It is also unusual because it is relatively isolated, in the direction of the largest modern constellation, called Hydra.

A potential explanation for this is that lots of dark matter is associated with these galaxies, which has come together to form a large cloud. The galaxies orbiting within this dark matter would slow as they make their way through it, falling closer together as they lose velocity.

"I remember seeing this on a sky survey and saying, 'wow look at that!' All that I was using at the time was a big plastic ruler and a magnifying glass while looking over sky survey prints," said Paul Hickson of the University of British Columbia, Vancouver, Canada, who re-discovered the group in 1966.

Check out the full-size image taken by Hubble on NASA's website. 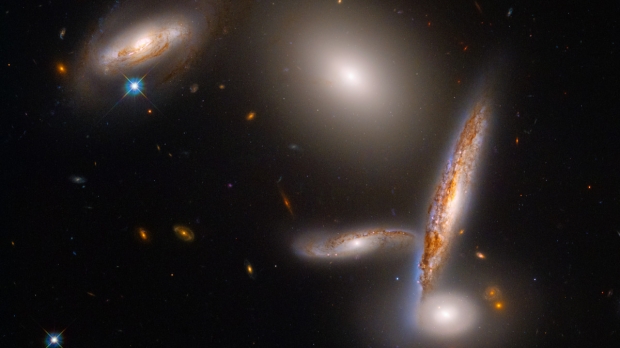 The Hubble Space Telescope: From Concept to Success