A Californian-based company has announced it will be attempting to catch the first stage of a rocket booster with a helicopter at the end of April, 2022.

Rocket Lab has put out a press release that announces it will attempt to catch the falling Electron first-stage rocket booster mid-air after it has separated from the main stage. Here's the plan for the mission called "There and Back Again". The 59-foot-tall Electron rocket will launch from Rocket Lab's New Zealand launch site carrying 34 satellites into orbit.

Before Electron is launched, Rocket Lab will already have set up a customized Sikorsky S-92 helicopter that will be located around 150 nautical miles off the New Zealand coast, where it will wait to catch the falling rocket stage. Here's what Rocket Lab expects to happen. Around 2.5 minutes after the launch, the second and first stage will separate, with the first will fall back down to Earth, and the second will continue transporting the cargo to its designated location.

"We're excited to enter this next phase of the Electron recovery program. We've conducted many successful helicopter captures with replica stages, carried out extensive parachute tests and successfully recovered Electron's first stage from the ocean during our 16th, 20th and 22nd missions. Now it's time to put it all together for the first time and pluck Electron from the skies," Rocket Lab founder and CEO Peter Beck said in a statement.

As the first stage plummets back down towards Earth, it will deploy a parachute approximately 8 miles above the ocean, which will then be followed by the main parachute deployment at 3.7 miles above the ocean. With the parachutes deployed, the rocket stage will slow down to around 22 mph, which is when the helicopter equipped with a hook will attempt to latch onto the parachutes and then haul the rocket stage back to Rocket Lab's launch site.

"Trying to catch a rocket as it falls back to Earth is no easy feat. We're absolutely threading the needle here, but pushing the limits with such complex operations is in our DNA. We expect to learn a tremendous amount from the mission as we work toward the ultimate goal of making Electron the first reusable orbital smallsat launcher and providing our customers with even more launch availability," said Beck.

If all is a success, the helicopter will transport the rocket stage back to the launch site, where engineers will assess the stage and decide if the method of retrieval/rocket is reusable. Rocket Lab has scheduled the launch of the Electron rocket to be no earlier than April 19. 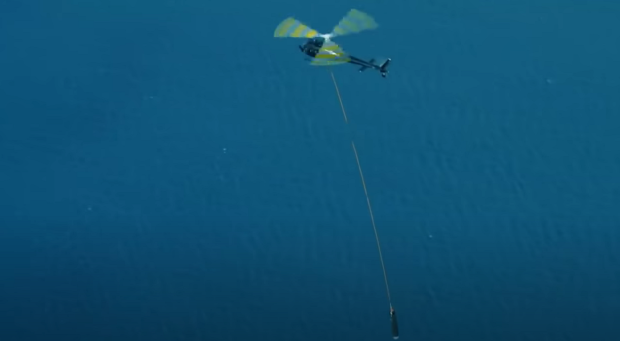