The Hubble Space Telescope has photographed a distant spiral galaxy that is located many million light-years away from Earth. 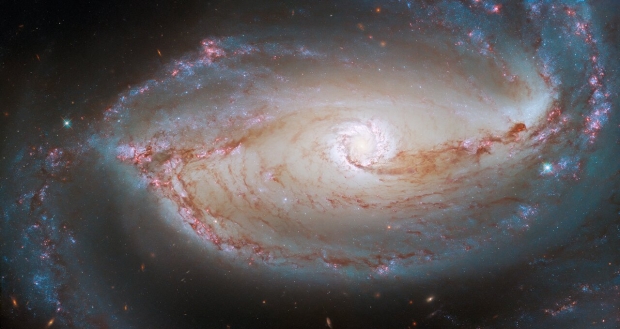 The spiral galaxy is NGC 1097, that's located 48 million light-years from Earth and resides in the constellation Fornax. At the center of the above image, you can see what the European Space Agency (ESA) describes as an "eye", or the heart of the galaxy. ESA officials said in a statement that this picture showcases the "intricacy of the web of stars and dust at NGC 1097's center, with the long tendrils of dust picked out in a dark red hue".

The image was captured with Hubble's Wide Field Camera 3 and the Advanced Camera for Surveys, which allows astronomers to capture both light that humans can see and infrared light the human eye can't detect. ESA officials explain that after the galaxy is captured in several different wavelengths of light, the image is colorized for public viewing. If you are interested in reading more about galaxy NGC 1097, check out this recent release by the ESA here.