The increase has come following the Russian military's capture of the Chernobyl Nuclear Power Plant and Pripyat. 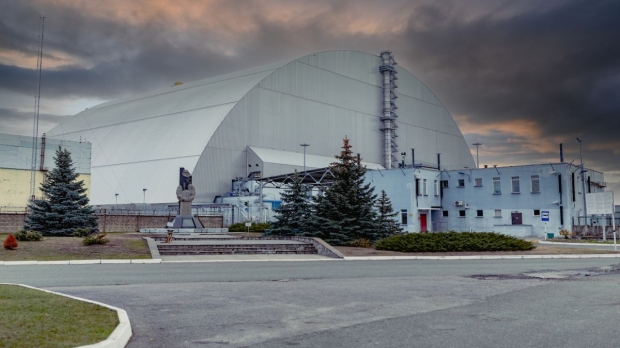 Ukrainian officials say the heavy fighting between Ukrainian and Russian troops in the Chernobyl Exclusion Zone has led to increased radiation. The automated radiation-monitoring system in the area shows a 20-fold increase in gamma radiation above normal levels at multiple observation points. The cause has been attributed to radioactive dust thrown up by the movement of troops and heavy military equipment in the area.

The power plant is currently entombed in a concrete sarcophagus, surrounded by the New Safe Confinement structure shown in the picture above. Combat in the area has led to concerns that munitions may potentially damage these structures, threatening to release more radioactive material.

"What is intriguing is that the level of radiation has increased mostly around the main routes in and out of the Chernobyl exclusion zone, as well as the reactor. This would tend to suggest that increased movement of people or vehicles may have disturbed radioactive dust," Claire Corkhill, a professor of nuclear material degradation at the University of Sheffield in the UK, wrote on Twitter.

"Chernobyl has been seized and I think they will blackmail the West. The President's Office is preparing a response to possible blackmail through Chernobyl," Oleksiy Arestovych, an advisor to Ukrainian president Volodymyr Zelenskyy, said in a statement.