All NewsBusiness, Financial & LegalCases, Cooling & PSUContests & GiveawaysCPU, APU & ChipsetsDealsDisplays & ProjectorsGamingMotherboardsScience, Space & RoboticsStorageVideo CardsVirtual & Augmented Reality
All ReviewsAll ArticlesAudio, Sound & SpeakersCases, Cooling & PSUCPUs, Chipsets & SoCsComputer SystemsDisplays & ProjectorsGamingMotherboardsNetworkingPeripheralsRAMStorageVideo Cards
GuidesGamingAsk the ExpertsNewsletterAboutForums
RTX 3090 TiRTX 4090Diablo 2GTA 6Halo InfiniteElon MuskRTX 3080HDMI 2.1
Video Cards
Toshiba Japan has launched a new dynabook Satellite notebook which goes under the WXW moniker. Although it's likely to drop the dynabook branding when it arrives outside of Japan, the name isn't what's important, but rather what's on the inside. This is one of the first notebooks with a pair of GeForce 8600M GT cards in SLI which also features a Core 2 Duo mobile processor and the reasonably new Intel PM965 chipset.

The CPU is a Core 2 Duo T7700 which is clocked at 2.4GHz and this has been paired up with no less than 4GB of DDR2 memory, although it's only 667MHz modules due to some limitations when it come to available modules for notebooks at this size. Each of the graphics cards has 256MB of GDDR3 memory, although they can also use TurboCache if more is needed. 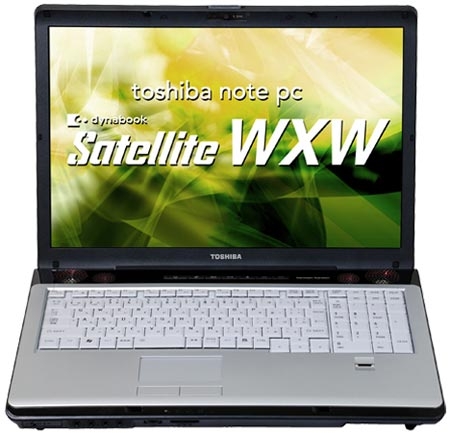 The display is a massive 17.1-inch panel and it has a native resolution of 1,680x1,050 and you should be able to play games quite nicely at full screen resolution thanks to the two 8600M GT cards. The Satellite WXE also features two 160GB 5,400rpm SATA drives for a total storage capacity of 320GB, although we're not sure if this is a RAID configuration or not.

The optical drive is slightly disappointing considering the other specifications, as it's only a super multi DVD writer. It will handle all sorts of DVD media, including RAM and dual layer. In terms of connectivity there's plenty on offer, such as Gigabit Ethernet, 802.11 Draft-n Wi-Fi, a multi-format card reader that accepts all formats bar Compact Flash, six USB 2.0 ports, FireWire, optical S/PDIF out, HDMI and even an old fashioned dial up modem.