NASA has taken to its blog to explain that the Hubble Space Telescope has been used to observe a region of space called the Chamaeleon Cloud Complex. 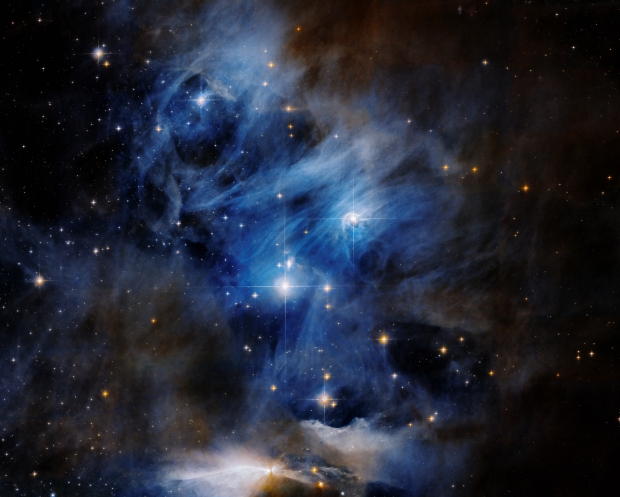 The Chamaeleon Cloud Complex is a star-forming region that stretches 65-light years wide. The above photograph is a composite image called Chamaeleon Cloud I (Cha I), and it showcases the reflection nebulae glowing with the light of the young blue stars. Additionally, the dusty dark clouds seen throughout the image are regions of space where stars are forming. Radiant knots are also seen throughout the image. These are called Herbig-Haro objects.

NASA explains, "Herbig-Haro objects are bright clumps and arcs of interstellar gas shocked and energized by jets expelled from infant "protostars" in the process of forming. The white-orange cloud at the bottom of the image hosts one of these protostars at its center. Its brilliant white jets of hot gas are ejected in narrow torrents from the protostar's poles, creating the Herbig-Haro object HH 909A."

The space agency writes that Cha 1 was observed with the intention of locating low-mass brown dwarf stars. NASA describes these stars as "failed" due to their lack of mass restricting them from ever igniting to sustain nuclear fusion within their cores. "Hubble's search found six new low-mass brown dwarf candidates that are helping astronomers better understand these objects."