Dying Light 2 will be supplied with new content until at least 2027. 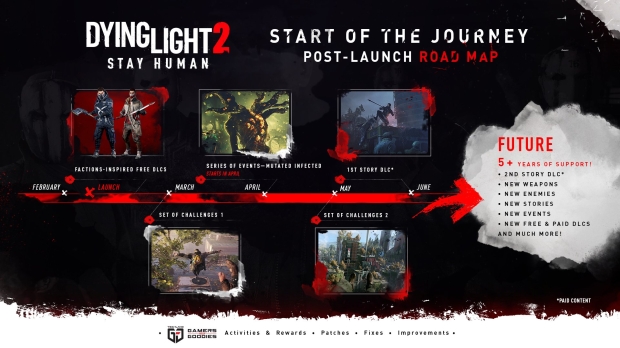 Techland is going all out with Dying Light 2. Just like the first game, which had new content launching five years after release, the developers are prepared to support Dying Light 2 with new content for multiple years.

"It all starts on release, but it's just the beginning! We're planning to keep enhancing the game with DLCs, challenges, stories, events, and more for at least 5 years, and that's a minimum! You sure won't be bored!" Techland said on Twitter, revealing its new timeline roadmap for post-launch Dying Light 2 content.

The pipeline looks pretty robust. There's a few free DLCs coming shortly after launch in February, alongside challenges in March and a bunch of in-game events that will unfold in the dynamic online co-op world. The first story DLC is due out in June and will be a big expansion-level affair similar to The Following.

Techland does note not all of this content will be free, so expect a season pass or to pay $19.99 for each expansion.