People Can Fly is developing a second AAA game for Square Enix...could it be Outriders 2? 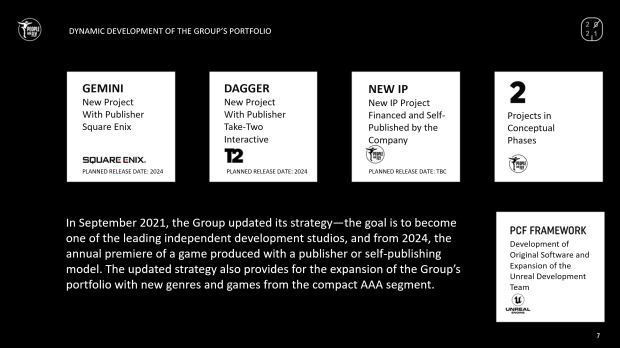 Polish game developer People Can Fly is very busy. The company has expanded to multiple territories and is working on three big new games, one of which is another title for Square Enix.

The studio's recent Q3 2021 financial report confirms two new games are in currently in production for a slated 2024 release: Project Gemini, a new game for Square Enix, and Project Dagger, an RPG action game for Take-Two Interactive. PCF is also working on another new IP that it plans to self-fund and self-publish.

People Can Fly signed a multi-year deal for Outriders back in 2016, and five years later the game was released. It's possible Project Gemini was also included in the deal...and if so, Gemini might be Outriders 2.

The company also notes that it has two projects in concept phases. One of these new games is probably a VR title. People Can Fly recently acquired VR specialists Incuvo, who are responsible for VR versions of Layers of Fear, Blair Witch, and the upcoming Green Hell.

"We are very much looking forward to working with the Incuvo team and implementing a new project," People Can Fly studio head Justin Cocoran said

People Can Fly says its expansive team--which employs over 300 game devs across 7 studios--can work on two AAA games at the same time.