All NewsBusiness, Financial & LegalCases, Cooling & PSUContests & GiveawaysCPU, APU & ChipsetsDealsDisplays & ProjectorsGamingMotherboardsScience, Space & RoboticsStorageVideo CardsVirtual & Augmented Reality
All ReviewsAll ArticlesAudio, Sound & SpeakersCases, Cooling & PSUCPUs, Chipsets & SoCsComputer SystemsDisplays & ProjectorsGamingMotherboardsNetworkingPeripheralsRAMStorageVideo Cards
GuidesGamingAsk the ExpertsNewsletterAboutForums
RTX 3090 TiRTX 4090Diablo 2GTA 6Halo InfiniteElon MuskRTX 3080HDMI 2.1
Audio, Sound & Speakers
Razer has announced a new gaming keyboard and a new headset and both look really sweet. Let's start with the keyboard, which goes under the Razer Lycosa name and features some gamer specific features such as a non-slip rubber finish and backlit keys. More specifically, the W, A, S, D keys can be lit up on their own without the need of the rest of the keyboard being lit up.

The keyboard also has a set of touch sensitive media playback controls which Razer has christened the TouchPanel. So rather than having an array of extra keys above the function keys, there's a small touch sensitive pad around the keyboard LED's where these controls are located.

Another useful feature, although it might be considered cheating, is the programmable keys with macro functionality. The keyboard also has 10 customizable profiles with on-the-fly switching. A cool feature is the fact that you can disable the Windows keys when you're gaming, which prevents you from exiting the game by mistake.

Then there's the fact that it's using 1000Hz Ultrapolling and has a 1ms response time which should prevent problems produced by pressing two keys at the same time. It also has a detachable wrist rest, a USB port for your mouse or anything else and a headphone and microphone jack.

The Razer Piranha headset has according to Razerbeen designed from the ground up to give you the best mix of comfort and functionality as well as realistic in-game audio. The Piranha's are meant to have improved clarity and bass and they also have a noise-canceling microphone. 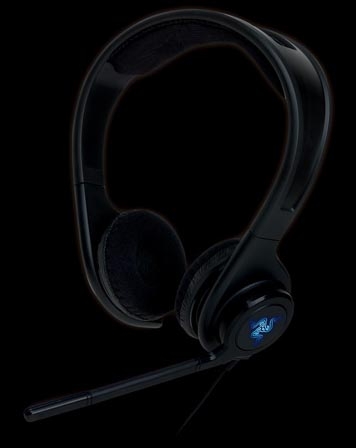 The head band looks really comfortable with its cushioned surface and so does the ear cups. There's an in-line remote that allows you to adjust the headphone volume and mute the microphone.

Both of the new products should be available for about US$80, with the Razer Lycosa hitting retail in November and the Razer Piranha coming out some time this month,

You can find out more over at Razer's website
Newsletter Subscription