All NewsBusiness, Financial & LegalCases, Cooling & PSUContests & GiveawaysCPU, APU & ChipsetsDealsDisplays & ProjectorsGamingMotherboardsScience, Space & RoboticsStorageVideo CardsVirtual & Augmented Reality
All ReviewsAll ArticlesAudio, Sound & SpeakersCases, Cooling & PSUCPUs, Chipsets & SoCsComputer SystemsDisplays & ProjectorsGamingMotherboardsNetworkingPeripheralsRAMStorageVideo Cards
GuidesGamingAsk the ExpertsNewsletterAboutForums
RTX 3090 TiRTX 4090Diablo 2GTA 6Halo InfiniteElon MuskRTX 3080HDMI 2.1
GSmart, a division of Gigabyte, has released its latest Windows Mobile 6 smart phone and this time it packs a built in GPS receiver. The GSmart i350 has a 2.6-inch touch screen LCD display with 480x640 resolution and it does 260,000 colours. It's great to see another Windows Mobile device with a VGA resolution screen and we can only but hope that more manufacturers follow suite. It measures 110x54x18mm (HxWxD) and it weighs in at 130g with the battery and it has a fairly stylish if somewhat bland black design. 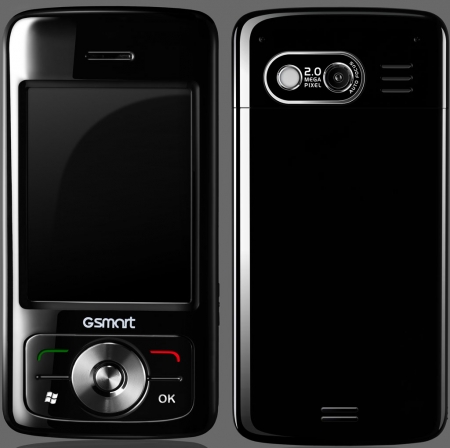 The built in GPS receiver is based on a SiRF Star III chipset which has proven to be one of the best on the market. There's also a rear mounted 2 Megapixel camera around the back with auto focus and an LED flash. The camera allows you in combination with the GPS receiver to take geo tagged photo's which can be cool if you don't remember where you took your pictures. The battery is good for about 4.5h of talk time and 16h standby.

The only complaint we have is that it's only a quad band GSM handset with GRPS class 12 support. There's no EDGE or 3G to be seen which is a shame on a brand new device like this. An odd software feature is what GSmart calls Wise Talk, which is not only a built answering machine, but it can also add background noise to your callers to hide your whereabouts. Another feature which might be useful is the ability to control the i350 from your PC when it's connected ActiveSync, something we haven't heard about before.

The i350 is available in Russia as of now and comes with satnav software there, but we don't have a price and no information was provided about availability elsewhere.

You can find out more at GSmart's website here
Newsletter Subscription