But now Razer has announced they have a legendary giveaway during their Razer Con 2021 event, with their partners in Xbox, AMD, and Halo giving away 10 of the new AMD Radeon RX 6900 XT Halo Infinite Edition graphics cards. There are only 117 of the cards being made, so Razer having 10 of them to give away is actually a big deal.

Razer explains in a follow-up tweet: "Prepare for battle and get a chance to win simply by sharing and tuning in to our stream now. From now till November 15, be sure to keep a lookout at https://rzr.to/halo-giveaway for daily opportunities to score yourself one of these super exclusive graphics cards and more".

The company explained: "Launch is just the beginning for Halo Infinite on PC. As such, AMD was willing to pursue a close, long-term partnership with Halo across both engineering and marketing efforts. Looking ahead,we've identified opportunities for additional configuration options, performance tweaks, and memory improvements across both PC as well as console and we're working together on more optimization solutions that should benefit all platforms". 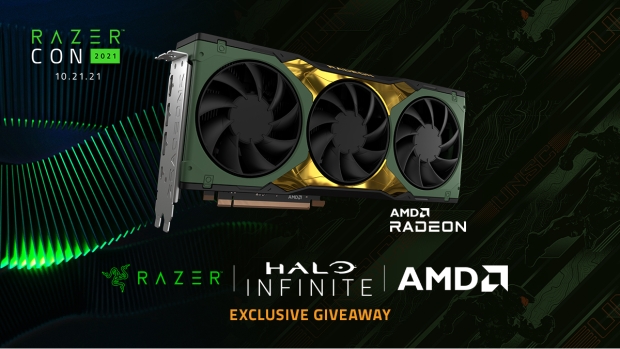 "Most excitingly though, we're looking forward to working closely with AMD to bring raytracing to Halo Infinite. Raytracing is one our top development priorities post-launch and look forward to sharing more soon".