YouTuber RandomGaminginHD answers a simple question: How does Far Cry 6 run on integrated graphics? The answer might surprise you.

Today's modern games require serious high-end hardware for stellar performance. But what about the other end of the spectrum? How do today's demanding titles run on builds below minimum specs like, say, on iGPUs? Take Far Cry 6, for example. The game actually runs at 30FPS+ on an entry-level dual-core AMD Athlon 3000G APU with AMD FidelityFX FSR doing some serious heavy lifting.

According to YouTuber RandomGaminginHD, the Athlon 3000G with its integrated Vega 3 graphics can hit around 35FPS with resolution set to 1280x720 and all settings cranked down the their lowest levels. FSR performance mode is a must to achieve 30FPS+ but don't expect the visuals to look great--FSR takes a big chunk out of on-screen fidelity.

While it's possible you can run Far Cry 6 and play it on an AMD Athlon 3000G with Vega 3 iGPU graphics, don't expect dazzling perf or anything close to 60FPS at 720p. Still, though, it's great to see lower-end builds get some love. 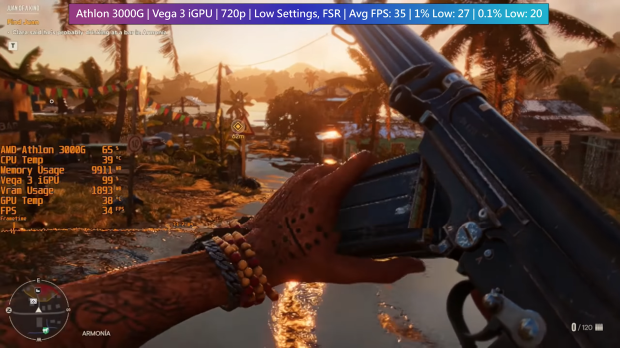