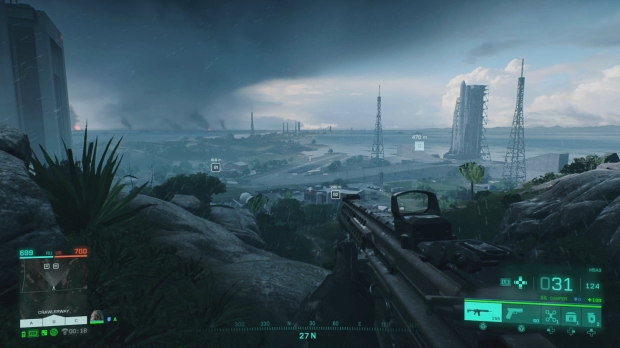 DICE and EA have made good on their promise to make Battlefield 2042 look great on on all platforms. The early access beta goes live tomorrow, October 6 at 3A EST on current- and next-gen consoles and PC. Last-gen Xbox One and PS4 gamers are worried about how the game will look and perform on older hardware, but according to a newly-leaked first-look screenshot from Tom Henderson, BF2042 looks pretty decent on the Xbox One's outdated Radeon 7790-esque GPU.

That being said, last-gen versions of Battlefield 2042 have some restrictions including being locked to 32v32 multiplayer (PS5, Xbox Series X/S, and PC have 64v64 chaos for 128-player multiplayer) and expect overall performance drops in both resolution and frame rate. While DICE hasn't explicitly confirmed FPS or res targets for BF2042 on PS4 and Xbox One, we might see something like 1080p 30FPS+ or closer to 60FPS with dynamic resolution scaling. PS4 and Xbox One family hardware also won't enjoy faster loading times (they're still using HDDs, not SSDs).

Battlefield 2042's signature chaotic level-smashing weather effects will be included on PS4 and Xbox One, though (probably expect FPS hits during storms).

On Xbox One and PlayStation® 4 you will have access to the same gameplay features that we've announced for Xbox Series X|S and PlayStation® 5. Weapons, Vehicles, Specialists and Gadgets all remain the same no matter what generation of console you're playing on.

Dynamic Weather events such as tornadoes, or Environmental Hazards like EMP storms will also be experienced by all players.

Our intention is to ensure that nothing detracts from the overall experience of playing Battlefield 2042. The main differences between console generations is that we've made adjustments to the playable area on the maps to ensure a fluid play experience for Xbox One and PlayStation 4® consoles.

Battlefield 2042 releases November 19 on all platforms, and the early access beta kicks off tomorrow, Wednesday, October 6 at 3AM EST.