Electronic Arts has made over $16 billion from live services in the past eight years, and digital revenues are becoming more and more important for the publisher. 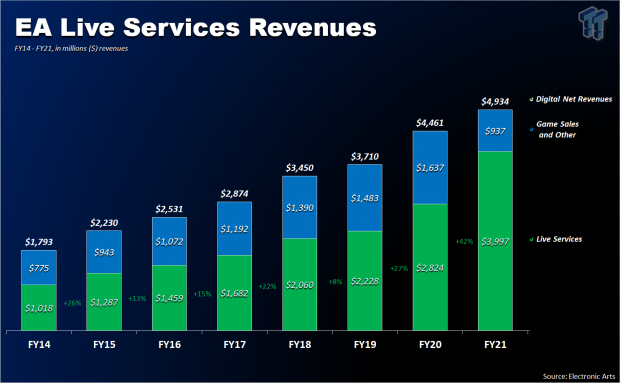 EA's billion-dollar empire is built on digital. The past decade has shown a few clear trends for Electronic Arts: Digital is dominating, game sales are becoming less relevant, and live services are meaningful for both short-, medium-, and long-term earnings. Case in point: Live services made up 81% of EA's FY21 digital net revenues. EA has flexibly adapted to a more digital-oriented marketplace and diversified its earnings to rely on in-game purchases rather than raw game sales. As a result the company has become a leading force in the industry. 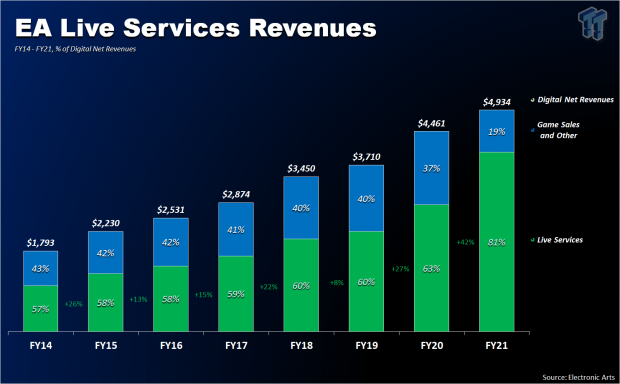 The main contributors are annualized sports games like FIFA and Madden, with Ultimate Team alone making up a significant portion of yearly digital earnings, as well as new heavy-hitters like Apex Legends (Apex alone is about to break $2 billion in earnings since releasing in FY20, making up nearly 1/3rd of live services revenues over the past 2 years). EA has become a lot less reliant on game sales. In fact, live services have always made more than half of yearly digital net revenues over the past 8 years.

So what does this tell us? EA should deliver more of the same. Expect more microtransactions, in-game purchases, subscriptions offerings, tons of post-release content, DLC, expansions, etc. all with a heavy emphasis on engagement.

Remember that games are a gateway to microtransactions and live services. While it's likely most of its new games will have live services in some fashion, whether they be micro-monetization via in-game purchases or macro-monetization via paid DLC and expansions, not every game needs to be inundated with online engagement mechanics for EA to make lots of money.