EA has earned over $28 billion from digital revenues in the last 10 years as online earnings eclipse physical sales. 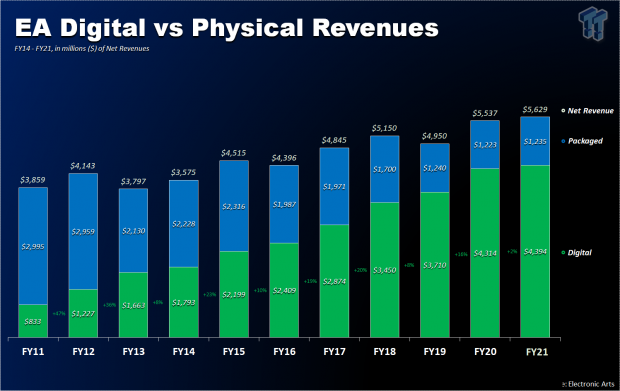 EA's digital empire has grown tremendously in the last 10 years with the expansion of live services and less reliance on physical game sales. Digital revenues, which include live services, subscriptions, and game sales made from online distribution channels, have grown 427% over the ten-year period: EA's FY11 digital revenues were $833 million and made up 22% of yearly net revenues, and by FY21, digital sat at a whopping $4.394 billion and made up 78% of earnings.

This represents a digital net revenues CAGR of 16%. EA's Ultimate Team model is a significant driver of yearly digital revenues, and has made the company over $7.9 billion in the last 8-year period from FY14 to FY21. 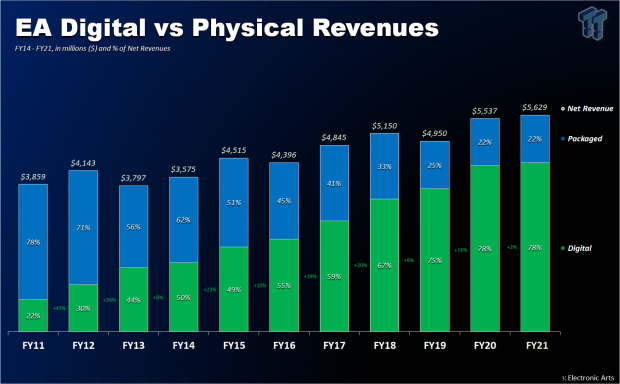 EA one of the top leaders in digital sales and monetization, but it wasn't always like this. 10 years ago during the Xbox 360 and PS3 era, the publisher relied heavily on packaged game sales. The company's live services ecosystem has dramatically evolved since then to become a billion-dollar force in the games industry, rivaling heavy-hitters like Ubisoft and Take-Two, and brushing up against Activision's whopping $7-8 billion revenues.

The publisher's game plan is now dominated by digital to the point where live services are more meaningful than actual game sales. Game purchases are now gateway points to the real earnings, which are in-game purchases made across a years-long span. EA's annualized sports franchises in particular offer the best of both worlds, serving as both vehicles for game sales and microtransactions.

The biggest contributors to digital earnings are titles like FIFA and Madden, as well as Apex Legends, which is on track to accrue $2 billion in revenues in two years on the market.