Like every game that Activision-Blizzard makes, Diablo IV will have microtransactions. Now we have a better idea of how they will work.

Blizzard has already confirmed Diablo IV will have cosmetic microtransactions, and a recent dev update gives us a look at how much work is being done for character appearances. Live games live or die based on two things: engagement, and monetization of said engagement. It's important that a game can pull in players and keep them, but also monetize them over time with in-game items, subscriptions, and expansions--and sometimes all three at once.

Diablo IV is no different in this regard, but it's a big departure from Diablo II and Diablo III--at least the latter Reaper of Souls era of D3 after the Real Money Auction House kerfluffle. An incredible amount of work is being put into Diablo IV's development, and Blizzard is adding a massive new character customization system that you'd typically find in singleplayer RPGs to ensure gamers have plenty of exposure to cosmetics (both in-game and paid).

"Diablo IV offers players more customization options than ever in a Diablo game. Your Barbarian is different from anyone else's but still feels undeniably like a Barbarian," Diablo IV director Luis Barriga said in the update. 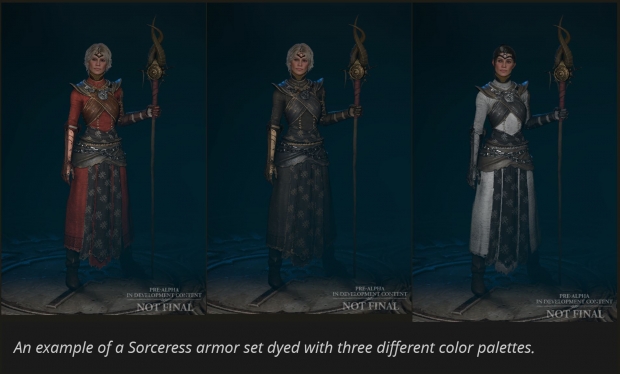 Diablo IV has a new Wardrobe system that will let players customize their class' appearance. Here gamers can "mix and match hundreds of armor components unique to your class, alongside custom color palettes."

This is prime territory for cosmetic microtransactions.

Diablo IV will let you customize:

Players can also dye any piece of armor--helmet, chest, gloves, legs and boots, further adding to the customization (and monetization) potential.

"Our dye system allows you to change the color palette of your armor pieces, such as changing silver to gold or replacing a white cloth for a black cloth, etc."

Blizzard is going all-out for character appearances in Diablo IV. The choices seem even better than a game like Skyrim.

This seems like an odd choice for a game that's always emphasized gameplay over graphics, but this is a new era of Diablo that merges old-school looks and feels with entirely new-school tech.

"We made massive improvements to the level of detail, the surfacing of complex materials like skin, cloth simulation, hair, fur, metal, even down to the details of the highlights of the eyes and rivulets of perspiration," said art director John Mueller.

"We built a robust character customization system that is entirely new to Diablo and it was a daunting amount of technical character work. These solutions had to work not just for a single character, but for hundreds of componentized armor sets, different body types, dozens of unique personas, and completely unique art for five distinct classes (to start)."

Okay, so what does this all mean?

Expect the new Wardrobe system to be a portal to cosmetic monetization.

Blizzard should sell a myriad of different virtual skins and whatnot to give players a distinct look. Your character has the potential to be very different in the base game, but you can really set yourself apart by purchasing extra cosmetics. Diablo III had a nice customization system with dyes and transmogs, but Blizzard wants to take it to a new level, hence why they've put so much work into character appearance.

That being said, I expect Blizzard to dole out a lot of cosmetics for free via seasonal content, rotating events, and in-game challenges. But this is definitely the avenue in which microtransactions will be sold.

It's worth noting that all of this is from an alpha build of the game. Nothing's final yet. Things can change--they will change. The very nature of any live game depends on adjusting to fan feedback.