The new flagship 48-inch OLED gaming monitor will compete against LG's flagship 48-inch 4K 120Hz OLED TV, but the new GIGABYTE offering in the AORUS FO48U is cheaper. We have a 10-bit panel with a native 4K resolution and 98% DCI-P3 color gamut coverage.

We have a super-smooth 120Hz refresh rate and AMD FreeSync Premium support, but GIGABYTE is hush-hush about VESA DisplayHDR certification -- although the official VESA page lists it with DisplayHDR 1000 support meaning it should have a peak brightness of 1000 nits.

Some of the additional details we now know about the AORUS FO48U gaming monitor, where we find out it has a built-in "Dashboard" that is an OSD-like display which provides real-time info on your hardware. That's a very nice touch, something a TV doesn't do -- something a gaming monitor would.

There's no word on pricing just yet, but it will not be cheap -- although I do expect it to be cheaper than LG's 48-inch 4K 120Hz OLED TV. 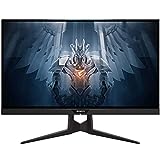