TEAMGROUP has just announced its next-gen DDR5 memory modules with the introduction of the new TeamGroup DDR5 Elite series memory.

The new DDR5 memory comes in single-stick 16GB DDR5-4800, with a basic, no-frills design and black PCB without a heat sink. TeamGroup points out that its new DDR5-4800 RAM has 1.1V ultra-low working voltage, and supports on-die ECC (Error Checking and Correction).

TEAMGROUP also has an internal gaming division with T-Force, which has teased it is working on next-gen DDR5 aimed at overclocking. T-Force has shipped out some overclocked DDR5 memory to motherboard partners including ASRock, ASUS, GIGABYTE, and MSI.

T-Force says that there is much more room for voltage adjustment with DDR5, which is good news for overclockers. This is thanks to the new power management ICs (PMIC) that will allow voltages to go over 2.6V which is what overclockers want (and need). 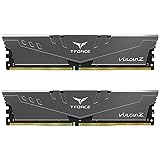