The Nintendo Switch just beat the Game Boy Advance in sales. It's next target? The mighty Wii. 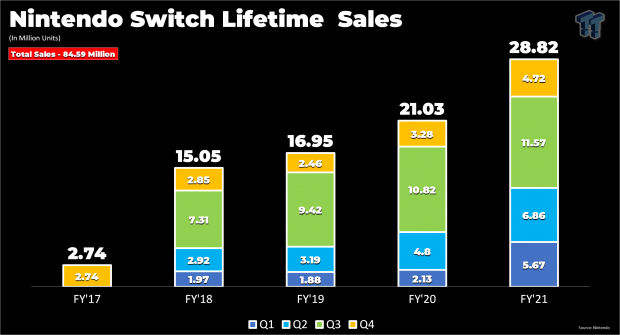 Nintendo just posted up its Fiscal Year 2021 results to much fanfare. We'll be going over the exact details of the numbers across a few articles, but first let's take a look at Switch sales growth. As of March 31, 2021, the Nintendo Switch has sold 84.59 million units cumulatively over its lifetime (our numbers below are at 84.62 million based on rounded figures from Nintendo). The handheld-console Switch family now outranks the Game Boy Advance (81.51 million) and has become Nintendo's fourth best-selling platform of all time in hardware sales. 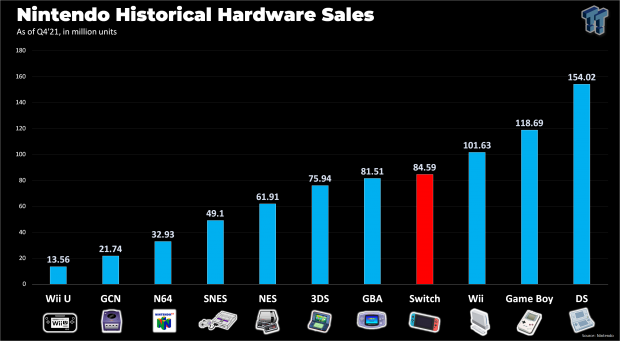 On a quarter-by-quarter basis, the Switch has consistently hit record sales performance. Fiscal Year 2021 was the best period in the system's history with 28.84 million sales globally (+37% year-over-year). Each quarter in FY21 consistently set a new record high for sales thanks to the tag-team Switch Lite and base Switch duo working together during a period of unusual demand.

The Kyoto-based company expects to sell 25.50 million Switch consoles in FY2022 (March 2021 - April 2022), and if it does, the Switch will beat the Wii's titanic 100 million unit sales, and will be 8 million sales away from dethroning the mighty Game Boy (118 million sales).

The company is currently ramping up Switch production for 2021 where it will introduce a new Switch model, the rumored Switch 4K, sources say. Nintendo has yet to formally announce the product.