Third-person PvPvE shooter Scavengers aims to push multiplayer gaming to new heights with game sessions that host thousands of players at once. 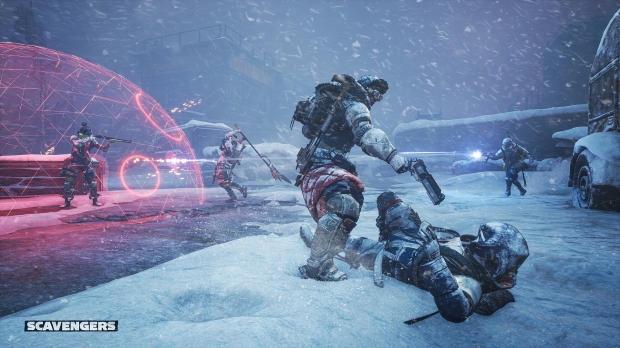 Scavengers is among the first major games to implement Improbable's SpatialOS technology, which offers a flexible infrastructure for online-based games. Armed with SpatialOS, Midwinter is experimenting with some truly mind-boggling player numbers in Scavengers.

According to PC Gamer, who played an experimental internal dev test, Scavengers is capable of hosting thousands of players at once in a new open-ended sandbox mode. The session wasn't bound by the typical PvPvE rules found in other Scavengers gametypes; instead it was more freeform, a kind of world where developers could play god, flinging players across the map, spawning hordes of enemies, and various other physicality effects like growing to monumental proportions.

At the end of the session, devs spawned in thousands of virtual characters to push the total player count to over 9,600. That's in one session.

Midwinter Entertainment is one of Improbable's development teams, so it makes sense that Scavengers has direct access to top-tier SpatialOS technology. It's unknown whether or not this kind of mass-player gaming will actually show up in Scavengers at some point, but it's definitely interesting to see these kinds of experiences pop up in modern gaming.

Improbable makes use of Google Cloud, as an older press release explains:

"SpatialOS leverages the effectively limitless computational power of the cloud by allowing game worlds and gameplay systems to be seamlessly distributed across multiple cores and servers. Using this multiserver architecture, developers can rapidly build, test, debug, launch, redesign and scale multiplayer games - from action-packed, session-based Battle Royale experiences to huge, experimental virtual worlds, shared by thousands of players at once."

Spearheaded by industry veterans, Midwinter Entertainment's Scavengers is an ambitious multiplayer co-opetition shooter with a mix of PvPvE and survival elements.

Scavengers is now out on early access on PS4, Xbox One, and PC.