I don't think we're too far from an official reveal or teaser trailer to the new Battlefield, or Battlefield 6 -- with industry leaker Tom Henderson teasing a drawing of a new map inside of EA DICE's next instalment to Battlefield.

Henderson notes that the map is a "literal storm" or tornado is flying towards the island, taking things to the next level in the new Battlefield. Henderson teases to "refer to old tweets to theorise what happens next" where if we combine what we know: next-gen destruction physics + natural disasters = storm damaging the island and building, changing the environment thus the map and the way you play once that happens.

I'd dare say that most of that jungle would be gone, visibility would suck (snipers, long distance weapons rendered useless) and if you took shelter in the building then the walls would possibly be destroyed. This would change the way you'd approach the game, with an actual tornado flying into the island and changing the entire environment, inside and outside -- all upside down and destroyed.

You can see in this tweet from @allthingaming that is an awesome edit by the way (if you read this) with the rocket at the end about to go off, and a huge tornado with lightning cracking through the middle of it coming into the coast. There's a building in between and a mountain range, with a bunch of planes flying around with plenty of players in them as we're looking at up to 128 players in the new Battlefield. 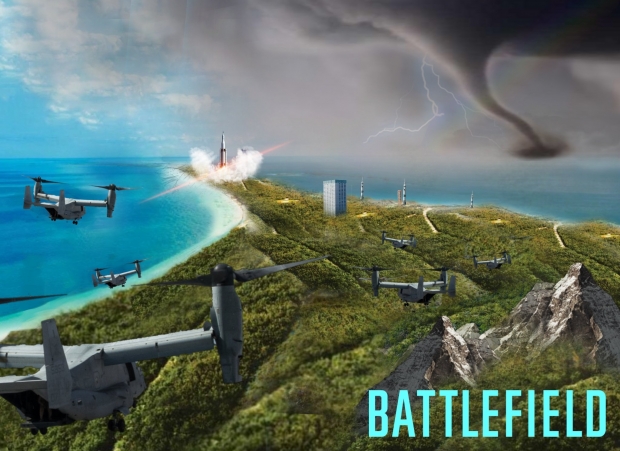