AMD has its new RDNA 2 architecture powering the new Radeon RX 6000 series desktop graphics cards, as well as the PlayStation 5 and Xbox Series X/S consoles but now it's time for laptops to get some of that Big Navi lovin'.

AMD recently announced the new Radeon RX 6700 XT graphics card powered by the new Navi 22 GPU and 12GB of GDDR6 memory, starting at $479 -- during this announcement CVP and GM of AMD Radeon, Scott Herkleman, said that the RDNA 2 architecture would soon make its debut inside of some new gaming laptops.

There's not much known about the RDNA 2-powered mobile GPUs apart from previous rumors on the TGP, which were from December 2020. At the time, Patrick Schur tweeted that Navi 22 (Mobile) would have a 146W TGP and 192-bit memory interface, while more offerings will be powered by NV22 and come in with 135W, 110W, and 90 TGPs and 160-bit memory interface.

If there was actually 7nm silicon to go around, AMD could have quite the pocket rocket with a Zen 3 + RDNA 2 powered gaming laptop. It's just such a shame there are shortages on virtually everything right now, but especially RDNA 2 graphics cards and Zen 3 processors. Sigh. 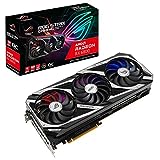