A new mod unlocks 60FPS in Skyrim on PlayStation consoles, but it won't work in Fallout 4. 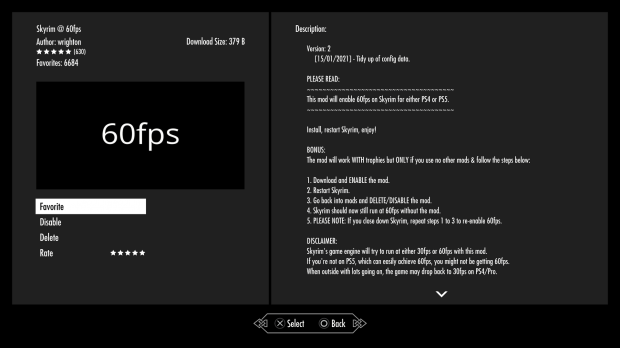 PS5 owners can now play Skyrim Special Edition in 60FPS and circumvent Sony's maddening 30FPS limit. All you have to do is download the Skyrim @ 60fps mod, a user-created mod uploaded to the in-game console mods section. Skyrim was originally meant to run at a native 4K resolution at 30FPS on the PS4 Pro, but with the mod it can hit 1080p 30FPS+ on the base PS4.

The PlayStation 5 in particular runs Skyrim at a solid and consistent native 4K 60FPS via the console's powerful backwards compatibility mode. The PS5 has more memory bandwidth (16GB of GDDR6 RAM) and a much more powerful GPU and CPU combo that can deliver lots more horsepower. The result is a PC-like Skyrim experience in terms of performance.

Sadly, the mod's creator Wrighton says there's no way Fallout 4 can be modded to run at 60FPS on PlayStation consoles. Xbox One and Xbox Series X, however, can hit 60FPS in Fallout 4.