So far, Returnal looks to be one of the must-have PS5 games of 2021. The game features weird sci-horror elements and uses explosive third-person action combat that reminds me very much of BioWare's failed action-RPG mashup. In a very real sense, Returnal is an evolution of ME Andromeda and shows what the game could've been like if it had more time to bake in the oven.

Watching Returnal's gameplay, it's hard not to instantly imagine Andromeda. Selene, the main character, zaps back and forth from place to place with a third-person camera, complete with jumping, chaotic shoot-em-up elements, and even some melee attacks.

There's even traps and other abilities thrown into the mix too. It's a little like a one-player Risk of Rain roguelike merged with Andromeda's jump-and-dash movement mechanics...but the combat is so snappy and electrifying that I can't help but wonder how BioWare's spin-off would've looked if it was released in 2021 instead of 2017.

The video goes into detail on Housemarque's strategy with Returnal, and how the narrative folds into the experience. There's discussions on performance on PS5 consoles, on the combat mechanics and roguelike design choices, and how the game is the most ambitious title the studio has ever med.

Returnal will release March 19, 2021 exclusively on the PlayStation 5.

Meanwhile, BioWare is working on Mass Effect 4. Maybe the studio is watching and taking notes?

After crash-landing on a shape-shifting alien planet, Selene finds herself fighting tooth and nail for survival. Again and again she's defeated, forced to restart her journey every time she dies.

In this roguelike shooter, both the planet and your equipment change with every cycle, forcing you to adapt your play style and take on evolving challenges. 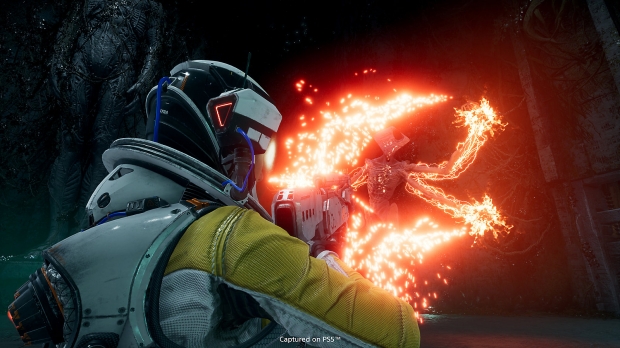