Sony has already shown off the PS5's high-end gaming capabilities with the stunning Gran Turismo 7 trailer, and revealed how the console's ultra-fast 5.5GB/sec PCIe 4.0 will destroy load times in the new Ratchet and Clank game. Now a single screenshot exhibits what the console will be capable of at launch. 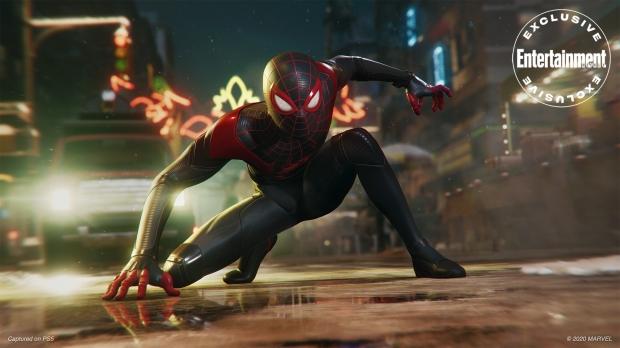 A new Spider-Man Miles Morales screenshot from Entertainment Weekly speaks volumes about the PlayStation 5's ability at launch. First-party devs like Insomniac Games apparently are pushing ray tracing right out of the gate, complete with new ambient weather and lighting effects. The puddle alone shows evidence of ray-traced reflections and mirrors the kind of thing we see in Control on PC.

We also know Spider-Man Miles Morales will be incredibly optimized on PlayStation 5. Insomniac has baked in a performance mode that hits 4K 60FPS, which is unheard of for this kind of game mode. Usually performance modes target 1080p 60FPS and don't deliver dazzling 4K 60FPS gameplay. This possibly hints the game will hit upscaled 8K resolution to complement Sony's new high-end 8K TVs.

The screenshot says it was captured on a PlayStation 5, but it begs to question if this is gameplay or a cinematic sequence. That's something we won't know until launch when gamers start picking apart the visuals.

The latest Entertainment Weekly interview confirms Miles Morales will be a full story arc, but as Insomniac already revealed, it'll be a shorter experience akin to Uncharted Lost Legacy. It won't be as long as the PS4 Spider-Man game.

"This is a full arc for Miles Morales that started in Spider-Man. We really are completing this hero's coming of age in our game. It is a complete story," said creative director Brian Horton.