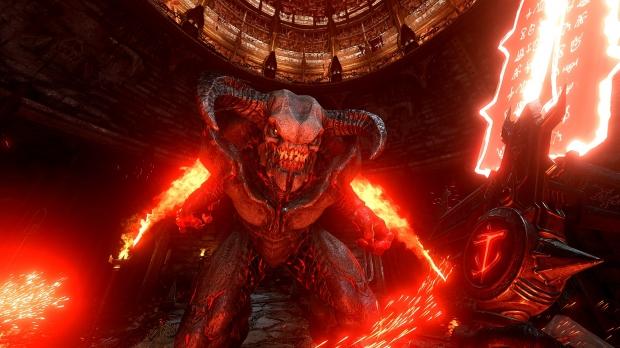 As we predicted, id Software will reveal next-gen optimizations for Doom Eternal at Quakecon 2020. The new id Tech 7 engine that powers Doom Eternal is future-proofed for multiple generations of enthusiast-grade GPU tech, and was built from the ground up for forward-compatibility with new console hardware too.

While no optimization details have been confirmed, we could see Doom Eternal as the first next-gen game locked at 120FPS on PS5 and Xbox Series X.

Bethesda's new policy will give all current-gen owners of its games a free copy of the next-gen SKU as well (if, of course, the game is re-released or upgraded on next-gen hardware). The publisher only announced that Doom Eternal and Elder Scrolls Online will be included so far, but Bethesda says more titles are coming soon.

Interestingly enough, it sounds like Doom Eternal and ESO aren't currently playable on the PS5.

The Xbox Series X natively plays all Xbox One games by default, but the PlayStation 5's backwards compatibility requires specific developer attention to work properly. The PS5 natively boosts games well past PS4 levels, and some games have to be re-tooled to handle the boost.

I personally hope to see Skyrim upgraded on PlayStation 5 with expanded mod support, native 4K resolution, and better frame rates. We could see the same treatment given to Fallout 4 and Fallout 76.

Be sure to tune in the Doom panel on August 7 at 7:30pm for more info on Doom Eternal's new DLC and next-gen enhancements. Also be sure to sign into your Bethesda.net account and snag a free copy of Quake on PC.

Players who own or purchase either title on Xbox One or PlayStation 4 will be able to upgrade for free to the Xbox Series X and PlayStation 5 versions, respectively, when those versions are available.

We'll have more information to share in the coming weeks and months about The Elder Scrolls Online and DOOM Eternal on Xbox Series X and PlayStation 5 including expected release windows and a list of enhancements. And while we don't have any news to share just yet on our remaining catalogue of titles, we can confirm we are committed to offer free upgrades for current generation console owners of existing Bethesda titles we bring forward into the next generation of consoles.

Here's the schedule for Quakecon 2020: