Spider-Man is just the beginning. Marvel's new Avengers game has a galaxy of platform-exclusive content and incentives. 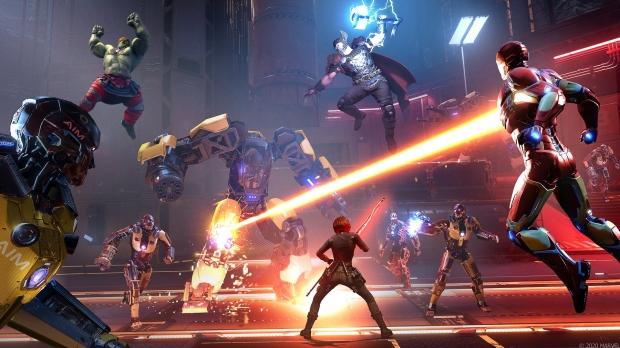 Marvel, Sony, and Crystal Dynamics just caught a lot of flak for making Spider-Man exclusive to the new Avengers game on PS4 and PS5. The decision makes a lot of sense, though; Sony has the movie rights to Spider-Man, and Marvel (aka Disney) cares most about sales and digital revenues, so they're attached to the biggest brand in gaming. Marvel doesn't make its own games, and instead licenses them out, so live games represent the ripest earnings fruit.

Turns out this deal goes a lot farther than Spider-Man. Marvel has signed an exclusivity deal with Sony that includes lots of other PlayStation-first content in the new Avengers live game. Spider-man is a permanent platform-exclusive, but other things like cosmetic skins will be 30-days exclusive on the PlayStation ecosystem.

Crystal Dynamics confirms that a handful of legendary (the rarest type) skins will be coming first to PS4 and PS5 gamers. This isn't that big of a deal to most players because it's not tangible game-changing content.

Cosmetics are just for vanity purposes, but in a live game like this, they are used specifically to attract and engage players. When someone sees a cool skin, they're more likely to keep playing to unlock it, or even ask the other player how they got it. Skins are walking advertisement for in-game rewards.

There's other PlayStation exclusives, too.

PS gamers will get exclusive access to new community challenges, which are in-game events that offer rewards. Any live game has these kinds of replayable daily/weekly/monthly tasks that give you some sort of crafting materials or in-game currency to power your grind.

We previously stated that we're huge Marvel fans, but we're also PlayStation fans. We are honored to be working with them to provide additional advantages to PlayStation players. PlayStation players will have exclusive access to certain Community Challenges, where the PlayStation Nation will work together to accomplish a goal in order to gain rewards specific to them.

When it comes to cosmetics, PlayStation players will have 30-day exclusive access to a Legendary Outfit, Legendary Emote, Epic Takedown, and nameplate for each Super Hero as they are released - this is also for the six launch heroes. In addition, we also have rewards for those with a PlayStation Plus subscription. For each Super Hero added to the game post-launch, Hawkeye included, all PS Plus members will receive a free bundle that contains a Rare Outfit, nameplate, and 100 Credits to celebrate the addition of another Avenger to the roster. At launch, we'll have a free bundle for Ms. Marvel available for PS Plus members to embiggen our love for Kamala!

PlayStation 4 players will be the first to play the Beta! The Beta for those who pre-ordered on PS4 will take place from August 7-9 with pre-loading available on August 6. Following that, the Open Beta for all PlayStation players will be available from August 14-16 and August 21-23. You also do not need PlayStation Plus to participate in the Beta, so all your friends are free to join! For more information on the contents of the Beta, please see our previous PS Blog.