The NPD Group reveals some interesting tidbits about U.S. gaming habits, revealing that roughly 14% of the country's population are heavy gamers. 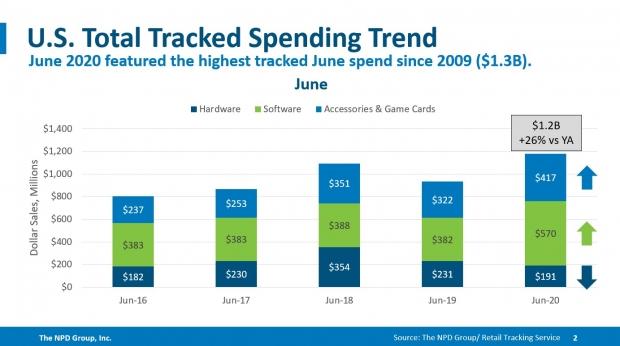 According to The NPD Group's Mat Piscatella, the gaming habits of U.S. consumers are on the rise. The analyst notes that 3/4ths of the United States population are gamers that spend time and/or money on interactive entertainment, or roughly 244 million people. Out of these, 20% of them, or 48 million people, are considered heavy users that spend over 15 hours a week playing video games.

The analyst firm also notes that gamers are playing on more devices than ever. In 2020, 65% of surveyed users said they are playing titles across multiple platforms, including consoles, PCs, and mobile phones, up from 59% in 2018. This uptick will help pave the way to more innovative gaming access points like Stadia and Xbox cloud game streaming to mobile devices via Project xCloud.

This growth is also reflective in U.S. consumer spending habits. Since January 2020, consumers have spent more on video games thanks to a combination of market environments, heavy-hitting games, and the ongoing COVID-19 pandemic. In June alone, U.S. game spend grew to $1.2 billion, up 26% since 2019 and hit the highest June month spending in the last 10 years.

Newzoo predicts the worldwide games market will generate $159.3 billion in 2020, up nearly 10% over 2019. This growth is expected to be driven by microtransactions and software, which will make over $117 billion, or 74% of 2020's total revenues.