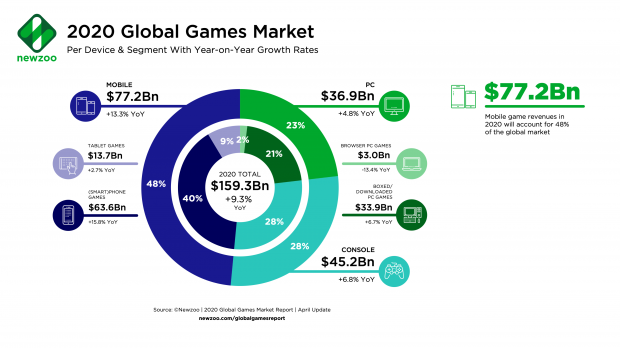 Newzoo has recently released their forecast for 2020's games earnings, and the growth is pretty substantial. The total games industry is expected to make over $159 billion this year across all segments--digital, physical, hardware and accessories--up 9.3% YoY and driven primarily by mobile gaming microtransactions revenue.

According to the report, this approximately 2.7 billion gamers will generate these revenues throughout 2020. Mobile will rake in $77.8 billion, or 48% of the total, dominated by smartphone games like Honor of Kings, Fortnite, and PUBG Mobile.

Console gaming's 729 million population will spend $42.9 billion in 2020, less than it did in 2018, but almost 7% more than it did in 2019. Bear in mind Newzoo adjusted its 2019 console estimations to align with softer demand as gamers wait for next-gen consoles.

PC gaming is on the rise, too. The segment, which includes billion-dollar browser games from titans like NetEase as well as premium games and microtransactions, will pull in $36.9 billion, or 23% of total yearly earnings. PC segment revenues are expected to grow by nearly 5% across its 1.3 billion population.

2020 will see China's return to dominance in games earnings. Newzoo had previously predicted the United States would beat China in games spending in 2019.

"Across all three segments (PC, console, and mobile), almost half of consumer spending on games will come from China and the U.S. in 2020. However, growth will be driven by emerging markets in regions like Latin America and Asia-Pacific in the years to come," Newzoo analyst Tom Wijman said in the report. 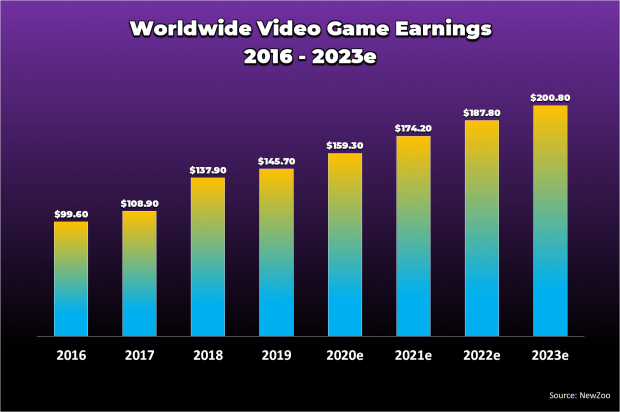 This is just the beginning of the industry's growth. The firm expects gaming to break $200 billion by 2023 in the height of the next console generation and the pivotal 5G era of mobile connectivity.

"Due to the new generation of consoles, growth in console game revenues will steadily grow every year, although we do not foresee revenues reaching double-digit growth before five to six years into the launch. Mobile gaming will continue to be the fastest-growing segment overall," Wijman said.