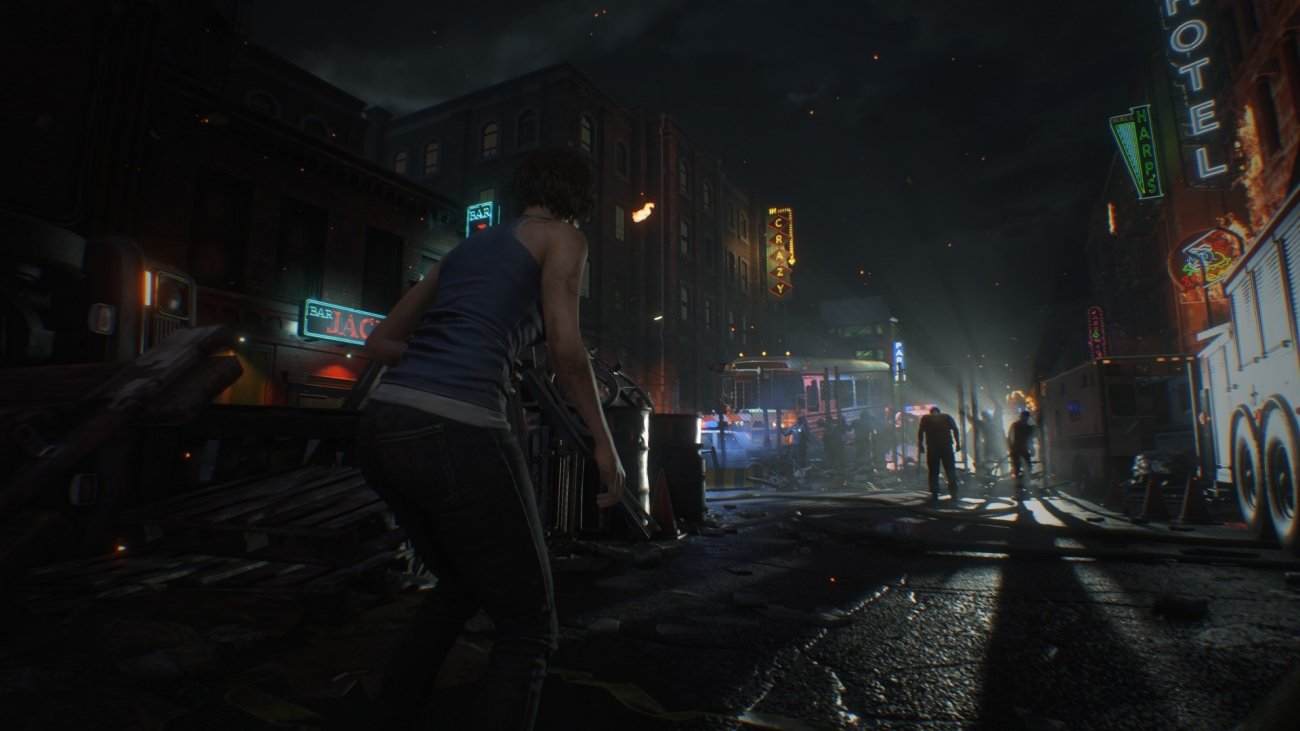 Resident Evil 3 will be a lot harder than the RE2 REmake; enemies are much more dangerous, there's lots of areas to get stuck in, and Nemesis makes Tyrant look like a baby. Luckily Jill Valentine has some serious skills at her disposal to strategically avoid and dispatch foes.

The main ability is emergency dodging, an evasion mechanic from the original game that's been massively overhauled. Jill can perform a quick and nimble over-the-shoulder roll out of harm's way by pressing R1 and the directional stick. The original game just saw you shove an enemy to avoid its grip.

There's also a new perfect dodge counter mechanic where you press X right before an undead horror grabs you. Jill not only dodges the enemy's clutches but swivels around with slow-mo aiming to give you prime opportunities to headshot those zombies. Or to blast a few rounds into nearby red barrels and create explosive death traps.

Everything has to be timed just right, though, and you can't just rely on raw nerve to survive. Gamers have to watch where they actually roll and make sure they don't evade right into a horde of brain-eating terrors. I can see myself dodging into an entire group of marauding ghouls in an attempt to avoid one enemy, or rolling into a corner by accident and getting caught in a claustrophobic area.

Emergency dodging adds a new thrill to the experience that keeps your reflexes razor-sharp...and from the looks of things you're going to need all the help you can get. This time around Nemesis will sprint, jump, and constantly crash through environments to wreck your day.

Resident Evil 3 releases on April 3, 2020 on PlayStation 4, Xbox One, and PC. The game comes with a free copy of Resident Evil: Resistance, a new 4v1 competitive online mode.

Resident Evil 3 is set amidst the nightmarish outbreak of the T-virus, a biological weapon developed by the pharmaceutical company Umbrella Corporation. The game marks the debut of Nemesis - a towering humanoid bioweapon designed for both brutality and high-functioning intelligence - whose dogged hunt of S.T.A.R.S. member Jill Valentine made him an icon of the Resident Evil series. Armed with an arsenal of high-powered weaponry and wrapped in a black suit to hide his mutilated features, Nemesis will maim, pulverize or destroy any obstacle on the path to his target.

Jill's harrowing escape takes place in the panic-stricken hours leading up to and following the events of the acclaimed best-selling Resident Evil 2. Intense combat and puzzle solving combine to deliver the heart-pounding final chapter of Raccoon City's collapse. The horrific settings from the original game and new content come to life as never before with RE Engine, previously utilized to create the acclaimed Resident Evil 7 biohazard, Resident Evil 2 and Devil May Cry 5 with high-definition graphics and modernized gameplay mechanics.